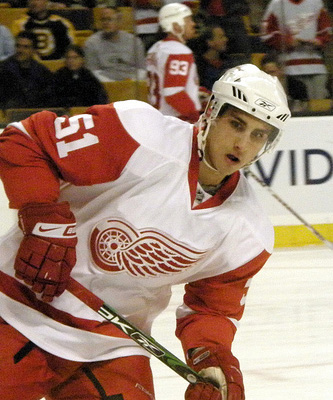 The Chicago Blackhawks took their best shots in Game 2 of the Western Conference finals. Nineteen of them in the first period alone.
But Detroit Red Wings goaltender Chris Osgood stopped all but one of them to set the tone in a 3-2 overtime victory, which gave his team a 2-0 advantage in the best-of-seven series.
There are two schools of thought about Osgood at this late stage of his career. One, because the Red Wings have had so many headline-makers such as Pavel Datsyuk, Nicklas Lidstrom and Henrik Zetterberg over the years, the 36-year-old doesn’t receive the credit that he deserves.
The other says that Osgood is an above-average goalie who benefits greatly from a puck-control system that limits the number of opportunities in front of him.
It doesn’t hurt to have Lidstrom around, either. The guy was the Norris Trophy-winner in six of the last seven seasons.
Personally, I believe the truth lies somewhere in the middle – because Osgood is more about savvy than spectacular, he tends to be underrated, but he lacks the athleticism to rank among the elite at the position.
Whatever the case, if the Penguins hook up with the veteran in the Stanley Cup Finals again,
then they will have to find more and better ways to solve him than they did a year ago, when he pitched shutouts in the first two games.
The latest Red Wings victory also underscored the importance of smart, disciplined hockey. Make one mindless mistake against them, as Blackhawks defenseman Brian Campbell did in the extra period, and there’s a good chance the puck will be in your net before long.
In the attack zone, Campbell attempted a backhand, cross-ice pass at the blue line that ex-Penguins forward Mikael Samuelsson turned into the game-winner at the other end.
It wasn’t the kind of decision that Blackhawks management had in mind when it offered him a $56.8-million contract last summer.
Afterward, Campbell said he would try the same high-risk play all over again. Maybe his words were an attempt to save face and restore confidence.
Otherwise, if Campbell does believe them and has the support of his teammates, then expect the series to be over sooner rather than later.