Is Rob Scuderi’s replacement in Nashville? 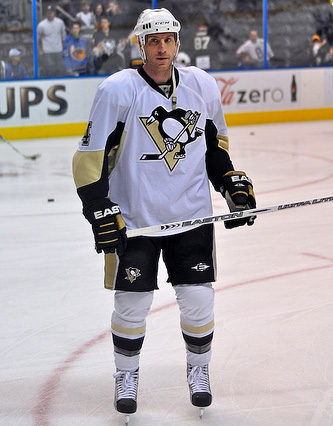 The Penguins search for a winger to play alongside Evgeni Malkin is no secret but a top priority for management is upgrading their blueline.
Pittsburgh is currently exploring options regarding depth defensemen but the teams top priority is finding a defenseman that can fill the role of Rob Scuderi, who the Penguins have yet to replace.
Pittsburgh is monitoring one situation very closely in what could become a two team race between Pittsburgh and rival Washington following the Olympic break.

That is the situation regarding the Nashville Predators and 27 year old defenseman Dan Hamhuis. Hamhuis, who I mentioned about a month ago as a prime target of Pittsburgh, was once seen as a major longshot.
That is no longer the case. If Hamhuis is unable to agree to an extension during the Olympic Break, Nashville GM David Poile has a dilemma on his hands whether to move Hamhuis or not.
At 6ft1, 205lbs, Hamhuis plays a Rob Scuderi type of game and will be highly coveted in free agency.
It’s believed Poile would only deal Hamhuis to the Eastern Conference. Sources indicate Pittsburgh and Washington have already made it known of their interest.
Some believe if Poile is unable to sign Hamhuis, Washington and Pittsburgh will be the two main teams in the mix.
Poile would seek an impact player and high draft pick and or /mid-tier prospect in return.
I’m told short-term players Ruslan Fedotenko and Jay McKee would be of interest as the Predators and Blackhawks were the two other finalists for McKee last summer.
Pittsburgh would then have to sweeten the deal with a high draft pick or prospect going the other way.
However, Poile could seek a player with term on his contract, likely Alex Goligoski, which could complicate a deal regarding the impact player going the other way.
Penguins general manager Ray Shero and director of player personnel Dan MacKinnon have close ties to the Predators organization and to Hamhuis who was the Predators first round pick in 2001.
Things could get interesting if Hamhuis doesn’t agree to an extension during the Olympic break (which is unlikely I’m told) and Hamhuis is a target that the Penguins are willing to move future assets (high draft picks/prospect) despite Hamhuis’ impending free agency.