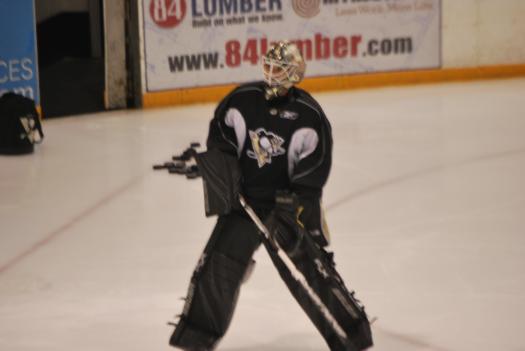 The calendar has hit November 1st and the Penguins goaltending situation continues to be the talk of the town as the Penguins went through a 90 minute practice on Monday.
Questions center around whether Brent Johnson should see increased playing time after going 5-0-1 with a 1.16 GAA and .960 save percentage in the month of October or if the Penguins priorities should be on getting Marc Andre Fleury more playing time.
After making six starts in October, two more than projected, Dan Bylsma hinted today that Johnson will continue to see an increased role in the short-term.
“Having two games really where he allowed the goal in St. Louis in overtime, he really had two games, sixty minutes of not allowing a goal, ” Bylsma said. He’s got some gaudy numbers right now and that definitely is a factor in the decisions for the three in four days.”
Pittsburgh will begin a three game in four night stretch starting Wednesday night against Dallas.
Today, both goaltenders talked about the current goaltending situation and Marc Andre Fleury is looking for more playing time.
“Pretty frustrating, ” Fleury said. “I’m use to playing a lot, win a lot, usually. It’s been tough for me, just looking forward to getting out of it and move on.”
Brent Johnson has been a great teammate to Fleury and wants the best for him but like all goaltenders, he’s relishing the opportunity to push for playing time through the early stages of the season.
Johnson talked about the importance of getting wins early in the season and admitted that his success and Fleury’s struggles have put the two goaltenders in a weird position.
“My view of it right now is it’s just about getting points, Johnson said.
“Obviously at the begining they’re important and you don’t realize until the end how important they are. The situation is if your speaking of the goalies, whoever Dan says to play, is going to come ready to play.”
“It’s put us both in a weird position, ” Johnson later said. “I mean it’s the game of hockey. It could easily be flipped flopped around. It’s one of those things goalies go through a time where wins are tough to come by and that’s just it.