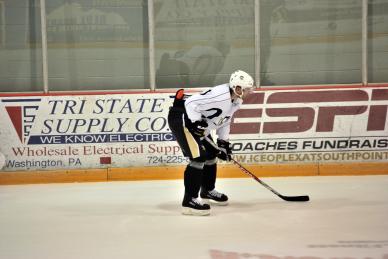 *The 8-1 Pittsburgh Penguins returned to the ice this morning and went through a 90 minute workout today and there will be a few lineup changes when the Penguins host the Florida Panthers friday night.
Goaltender Marc Andre Fleury will get a night off and backup Brent Johnson will get the start against the struggling Panthers. Fleury (8-0) will start Saturday night against the New Jersey Devils.
*All eyes will be on defenseman Martin Skoula tomorrow night who will replace star defenseman Sergei Gonchar in the lineup.
Skoula was drafted in the first round by the Colorado Avalanche in 1998 and when he first entered the NHL, Skoula was regarded as having the potential to being an elite defenseman. Some scouts even described him as a future Nicklas Lidstrom.
Skoula never matched those high expectations and the past two seasons were difficult ones for him. Skoula was a team worst (-16) for the Minnesota Wild in 2007-2008 and a (-12) last year for the Wild.
Pittsburgh though is very comfortable with Skoula who can be used in different situations. Skoula was a top target for the Penguins this summer behind Philippe Boucher for the No. 7 defenseman spot and the coaching staff has a ton of confidence in Skoula.
Practice Report: News and Notes
*Max Talbot did not skate with his teammates today. He skated yesterday with strength and conditioning coach Mike Kadar.
*Jay McKee (family reasons) was the only regular to miss practice.
*Kris Letang played with Brooks Orpik in the third period against the Blues but that might not be the case against Florida. In practice all of the defensemen rotated due to only having 5 skaters so there wasn’t any indication what the pairings will be.
Dan Bylsma though indicated today that the “plan for now” is to have Alex Goligoski paired with Orpik, McKee paired with Skoula and keep the Letang – Eaton pairing together.
*Expect Bylsma to use a number of scenarios over the next 3-4 games.
Power Play Units
1st unit: Guerin – Crosby – Malkin
Letang – Goligoski
*Pittsburgh did not use Evgeni Malkin at the point much in practice today but they did use Ruslan Fedotenko in one 5-on-3 situation where Fedotenko worked the right point with Goligoski working the left point. Malkin was at the top of the right circles for a one timer.
*The second unit got a lot of work against St. Louis. Mark Eaton and Martin Skoula worked the points today with Fedotenko – Staal and Kunitz down low.
*Will Chris Bourque get in the lineup tomorrow? Undertmined as Bourque remained the extra forward on the 4th line. Team officials continue to claim the organization has a plan for Bourque.