*Rumblings, Musings, Opinions*
View image | gettyimages.com
1. Kasperi Kapanen to the rescue? The Penguins are in the process of bringing their 2014 first round pick to North America and join the Wilkes Barre/Scranton Penguins, which has been the plan all along once his season ended.
A few logistics are being worked out between the Penguins and the agent. As expected, the agent is looking for a way to burn a season on Kapanen’s deal.
For Kalpa, Kapanen went from 7 goals and 14 points in 2013-2014 up to 11 goals, 21 points this season for Kalpa. Kapanen, though, is viewed by scouts as wearing down as the season went on and had 5 points in his final 24 regular season game but his production did tick up in the playoffs, with 5 assists in five games, something Jim Rutherford touted to Jenn Menendez yesterday of the Post-Gazette.
“His season has been very good and even got stronger during the playoffs,” Rutherford told the Post-Gazette.
Multiple sources say, Kapanen has little to no support throughout the organization of being an option to join the Penguins for the NHL playoffs, except for the man in charge, Jim Rutherford.
Some in the organization believe if Kapanen shows a glimpse of being able to adjust to the smaller rinks, Rutherford is bound to push Kapanen on the Penguins coaching staff, a staff that has no interest in implementing an East-West 18 year old forward who is 180-pounds, right into the mix of the playoff scene.
The consensus in the organization is that Kapanen’s nowhere near ready for NHL action at this point, let alone being thrown right into a playoff game, but don’t underestimate the pressure this front office has right now and Jim Rutherford is known to go against the grain and do what he wants.
One source said Rutherford views Kapanen like he did with Jeff Skinner in how went against his scouts who said Skinner was too small and not ready, and Skinner a smallish player like Kapanen, made an immediate impact at age 18. Some believe a similar situation could happen in a couple weeks.
2. Pierre LeBrun reported on Tuesday’s Insider Trading reported that the NHL is bringing back compensation for hiring away coaches, GM’s. “If it’s an offseason hire for either a president of hockey operations, a GM or a head coach, it’s a third-round pick that goes the other way for a guy that’s under contract,” LeBrun said. “If it’s an in-season hire, it’s a second-round pick.
“For a coach, the season ends as soon as his season ends but for a GM or president of hockey operations, the draft is the cutoff for in-season/offseason.”
Things might look different for the Penguins now if this was in place last summer. Prior to even hiring a GM, Penguins ownership tried to find a way (loophole) to get Mike Babcock out of Detroit and Jim Rutherford whose official title in Carolina was Team President at the time of the Penguins hiring him, would have cost the Penguins compensation if the rule was in place like it will be this summer. 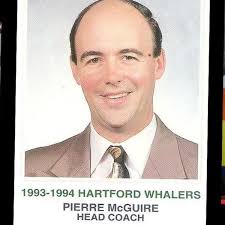 3. NBC’s Pierre McGuire, the guy who would be the Penguins GM right now if he would have accepted a three year offer the team made to him last June, was on 937 The Fan this morning and whether you like Pierre or not, he was spot on with his take that the biggest concern for the Penguins is a lack of identity, something we’ve been touting for weeks.
“That’s been the biggest concern I’ve had all year, is them finding an identity,” McGuire said. “For years, especially when Danny Bylsma was here as a coach, they were an aggressive offensive team that pushed the pace from the backend and they would attack you and whether they won games, 4-3, 6-2, they were going to outscore you more times than not. Mike Johnston’s came in and try to make them a more defensive team.
“This is a team on paper when everybody is healthy, should be good enough to compete, but I’ve been saying this since December, they have to find an identity. They have to find a way they need to play to be successful and they have not found that yet.”

Alex Ovechkin scores 50 goals in a season for the 6th time in his career. The milestone puts him in elite company pic.twitter.com/P9cRHsRMnq

4. Alexander Ovechkin last night hit the 50 goal mark for the sixth time in his career, tied for third all-time. 50 Goals in today’s NHL is quite a feat and Ovechkin is really a player that is a bit under appreciated. At 29 years old, Ovechkin has 472 goals and 891 points in 755 career games, including 31 goals, 61 points in 58 career playoff games, and for the flaws in his game, he’s a unique power forward winger with excellent size, speed, a lethal shot and an intimidation factor about him. He’s a player who could have played in any era and he has a chance to be remembered before it’s all said and done as one of the top-10 forwards to play the game of all-time, if he continues to play at a high level in his early to mid-30’s, which he should for at least the next 4-5 seasons.

5. ESPN’s Buster Olney isn’t shying away from his pick of the Pirates winning the World Series. “I love their depth,” Olney said today on Sportscenter. “They remind me of the St. Louis Cardinals. I think it’s going to be a big year for the Pirates and I have beating the Mariners [In the Worild Series].”
— Check out the TIOPS Daily Five Monday – Friday’s —

Favorites in the East Division?

have a roster that just looks built for the playoffs. A big, heavy hockey club that will wear the opposition down over a seven game series.

More and more, though, the Capitals look like they have a matchup problem when ...

— Bryan Rust dazzled in a Penguins 3-0 shutout win over the Washington Capitals, scoring two unassisted goals as the Penguins look more and more like a matchup problem for the Capitals. Rust two goal night moves him into a tie with Jake Guentzel for a team-leading 22 g...