Latest Buzz: Grabow for (Cubs prospect) Castro in the works?; Jackson also on the Pirates radar 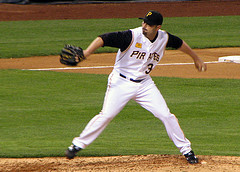 Live Updates: Latest Keep an eye on the Yankees
Neal Huntington and Yankees GM Brian Cashman have a close relationship and it should come as no surprise that the Yankees and Pirates are linked too each other again.
The Yankees, Pirates have discussed John Grabow and Matt Capps to some extent. The Yankees are also searching for a 4th outfielder.
* The Pirates remain in heavy discussions with the Cubs about Grabow.
Latest 12:15 p.m. – Grabow to Cubs heating up; Castro on Pirates radar?
The Pittsburgh Pirates and the Chicago Cubs continue to discuss John Grabow. The two teams have been in discussions for over the past week.
Pittsburgh has been eyeing two prospects in talks: Pitching prospect Jay Jackson and 2B/SS Starlin Castro.
Castro, 19, is the Cubs #7 prospect and is hitting .299 in Class A.
The Pirates have also been scouting pitching prospect Jay Jackson extensively this month.
I hear Pittsburgh values Castro over SS prospect Ryan Flaherty but it remains to be seen how interested the Cubs are in giving up the young Castro.
The Cubs are also in the market for a reliable back-up catcher.
Pittsburgh is seeking a high return for Grabow. The Rockies balked at the Pirates demands of Eric Young Jr according to Ken Rosenthal of Fox Sports and the Denver Post.