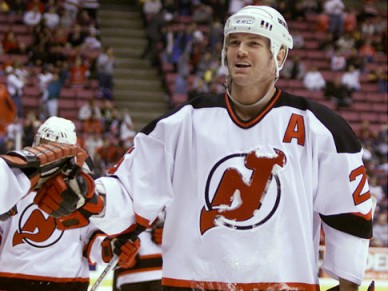 Several playoff and even Stanley Cup contenders addressed needs this week as the wheeling and dealing has been rampant throughout the NHL.
In the East, Philadelphia landed the top-9 forward they sought in Kris Versteeg, while Boston acquired their coveted puck moving defenseman in Tomas Kaberle.
Meanwhile, In Tampa Bay, the Lightning who have significant cap space to work with, addressed their blueline with the addition of Eric Brewer.
The Flyers and Bruins have maxed out their cap space while Tampa Bay is among the contenders in the Eastern Conference still aggressively looking to add, most notably a top-6 forward. Here’s the latest buzz around the league as the trade deadline is just 8 days away:
— The Dallas Stars are expected to at least begin this week to gauge the market for Brad Richards who does have a strong interest in re-signing with Dallas. The Stars though face difficulties to sign Richards due to ownership issues.
The issue for Dallas to deal Richards at the deadline is that there’s minimal suitors who can take on his salary.
Tampa Bay has the cap space and is one of Richards prefered destinations this summer. The Rangers also have the cap space, (another destination at the top of Richards wishlist), but the sense is both teams prefer to go after Richards in free agency than give up the assets right now.
— The Montreal Canadiens are among the most active teams on the trade market right now. The Canadiens are in hot pursuit of Dustin Penner and they are still looking to add a top-4 defenseman.
Montreal is looking to move salary to accommodate a big move or two and have made Andre Kostitsyn ($3.65MM cap hit) available.
— The word in league circles is that teams aren’t banking on Jason Arnott becoming available by the February 28th deadline. The Devils are surging in the Eastern Conference and have moved just 10 points out of the 8th spot in the East.
Things can always change in a week, but a source close to Arnott’s camp tells me Arnott has no intentions to waive his NMC (if asked) and believes in what’s going on in New Jersey and hopes to resign their next season. Among the teams who have had interest, include Washington, Tampa Bay and Montreal.
— The Washington Capitals have been checking in on some big names, including Florida’s Stephen Weiss and reportedly Edmonton’s Ales Hemsky who is also drawing interest from Los Angeles.
The Capitals are said to be exploring options upfront and on the blueline. Washington has just under $7.5 million in cap space. The Capitals always seem to flirt with the idea of making a splash at the deadline, but they never seem to go through with it.
— In the Western Conference, top contenders Vancouver and Detroit have little to no cap space to add at the deadline. San Jose addressed their primary need on the blueline, adding defenseman Ian White to the mix, which has maxed out their cap space.
The team that remains pretty active in trade talks is the Nashville Predators who are in the market for a defenseman.
— League sources tell Inside Pittsburgh Sports that Pens GM Ray Shero’s search continues to center around
scoring help on the wings not at center. They’ve checked into the asking price for Panthers center Stephen Weiss but that’s been about it when it comes to centerman on the market.
With Mark Letestu close to coming back and the Penguins operating under the mindset that Sidney Crosby is returning this season, adding a scoring winger or two remains the top priority.
One reason I’m told that the Penguins have yet to fully move on Alexei Kovalev is that he would tie up nearly all of their cap space.
The Penguins do not project to have as much cap space available as first expected, when Evgeni Malkin went down. That’s why we’ve seen the team operate from the standpoint on “waiting for the market to evolve.”
According to cap geek, the Penguins project to have the ability to take on a max cap hit of $5.6 million by February 28th. A team source told me this evening that those projected numbers are close. It was first believed Pittsburgh would have about $8 million in cap space.