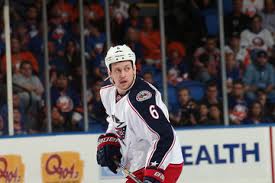 — Rangers GM Jeff Gorton turned down trade offers for Keith Yandle during the summer, including an aggressive offer from the Buffalo Sabres, and the move to hold on to Yandle is paying dividends. Scouts have raved about Yandle’s play to start the year after struggles to fit in with the Rangers last season and dealing with a shoulder injury during the entire post-season.

Yandle has 8 points in 14 games and has been driving possession for the Rangers. Yandle is carrying just a $2.625 million cap hit due to the Coyotes picking up half of his salary, among reasons teams’ have been trying to get him out of New York and they’ve had no luck. Don’t look for that to change.

Talk among executives is Gorton has all intentions of locking up Yandle long-term and it won’t surprise many that Rick Nash and Dan Girardi are actively shopped after the season to make room for Yandle and other pressing moves.

— Christian Ehrhoff’s time in Los Angeles could be short-lived. Ehrhoff a healthy scratch over the weekend has struggled mightily on the ice and winning over head coach Daryl Sutter has been a struggle for Ehrhoff.

Ehrhoff is being actively discussed in trade talks, league sources say. Contrary to reports, Ehrhoff does not have a no movement clause in his contract. Columbus who liked Ehrhoff over the summer are one of many teams trying to land a top-6 D and a potential fit.

— If anyone thinks Hurricanes owner Peter Karamanos Jr is going to sign off on anything to help the Pittsburgh Penguins, better think again when it comes to Eric Staal rumors. Things remain personal between Karmanos and Penguins GM Jim Rutherford, mostly from Karmanos end.

— The Penguins have had discussions with the Oilers [hide] about defenseman Nikita Nikitin, league sources say. Why is there interest from the Penguins in a player stuck in the minors? Because Nikitin can move the puck well, a key area of need, and is basically available for nothing and the Oilers are willing to eat much of Nikitin’s $4.5 million cap hit.

Nikitin has some supporters in the Penguins’ organization who scouted and saw Nikitin a ton in Columbus (2012-2014). Something to keep an eye on in what would be a low-risk move.

— Last year when the Penguins were on a Western Swing prior to the trade deadline, the Penguins’ brass came out of a game vs Edmonton blown away by Oilers defenseman Jeff Petry who would later be traded to the Canadiens. Penguins officials came out of Saturday’s game vs Calgary with a similar feeling about defenseman Kris Russell who the Penguins had already strongly coveted as a trade target.

Russell an excellent skater who moves the puck well, is also a shot blocking machine and the Penguins continue to monitor his availability and have been since last season. Russell is a pending free agent with a cap hit of $2.6 million. One executive projected Russell will command around $5-$5.5 million per season but that might be a stretch. The Flames want to retain him and would only consider a hockey trade at this point to move Russell.

One NHL source called Patric Hornqvist a Brian Burke type of player and that’s the type of scenario it would likely take to get the Flames’ attention. The Penguins, though, are not in the business of trading one asset from the NHL roster to address another need. Prospects, young players and draft picks will continue to be the route they go in upgrading the roster. Their eye is totally fixated on now not the future.

— Keeping Sidney Crosby happy will remain a top priority for Jim Rutherford and his staff moving forward. Finding Crosby a winger could become a top priority but don’t be surprised if you start to hear some Jack Johnson rumors surfacing as there’s some chatter in league circles the Penguins have kicked the the tires.

Crosby’s close friendship aside, the Blue Jackets are listening on almost anything, and Johnson has long been a favorite of many of the Shero left-overs who pushed hard to acquire Johnson in 2013. Jim Rutherford’s past with Johnson not turning pro quick enough for his liking which led to Rutherford trading Johnson years ago, is not an issue.[/hide]

Gaydogg said nowthat price is down habs will suck last i checked habs backup goalie was part of the 3 stars last week. maybe he sucks but the system in front of him plays a role .Once again Same is Right when he said DB system was bad for Fleury while You monkeys wanted Fleury gone before DB and drooling over Bernier,Ward,or that american choker Miller

Guy Boucher to become available after this season. I guess when the Pens bomb out again and Sidney is unhappy they will get him another wing and coach. http://sports.yahoo.com/blogs/nhl-puck-daddy/guy-boucher-to-leave-sc-bern-after-season–become-coaching-free-agent-153223734.html

i remeber when stan and some clowns wanted Clowe, Boyes, R.Bourque, Glencross ,Zubrus they all been drooled over and only thing they have in common they are all no longer in the league except for boyes and his days are numbered as well

Well, you remember as well as you go to the gym then, because I literally wanted none of those stiffs, chubby. Swing and a miss!

I remember when yogurt used to blame the league, saying it was impossible to amass points anymore – to make an excuse for his boy Cindy. Then Tyler Seguin shit all over his theory.

San Jose Sharks Patrick Marleau is willing to waive his no-movement clause to only 3 teams. This is a guy i wanted badly to come to Pittsburgh few years ago before he resigned with Sharks .habs or rangers can be the 2 teams expect nashville to go after him as well the have enough space in their cap space

hey, did anyone else see that iginla has 7 goals and 12 points so far this year? i wish the pens could have had a winger like that at some point. i wonder how he would do on the LW…..nevermind, screw it! he could never keep up with sid or geno! he’s too slow and he’s washed up! give me kunitz any day of the week!

They went with Kunitz because your boy Sid wanted him. What a ‘leader.’

i think the pens should trade for kessel. he would be the perfect winger for crosby because he’ll be able to keep up with sid.

You know what’s great – the four or so of us that knew he’d mesh better with Malkin from the word go.

Stanch, you need to bring some of your Sid hate to Dejan’s site.

This site has gotten boring with the new format. terrorizing homers on Dejan’s site is much more entertaining.

Why don’t you post the HERO chart for Kris Russell? Because he’s dead last in the league in terms of advanced stats? Because his analytics last year were terrible even with the most OZ starts? He’s made every Flames Defenseman worse this year. Stay far away!!!

lol I see the Jack Johnson rumor is back after taking last year off.

Can someone please log in and give my comments a “thumbs down”.

I got your back.

It sucks you can’t give yourself a thumbs down.

Keeping Crosby happy? How about Sid keeping the fans happy… they went out and got him Kessel… they blew it. GTFO

Scott Gomez and Sidney Crosby now tied in points with 7 each. Gomez reached the mark in 9 games. Where’s my $200?

If we trade with Calgary TJ Brodie should be the target not Kris Russell. No offense but Russell is another 5-10 guy and we don’t need to get smaller. Brodie is more “Martin” like. Very steady and shown with Giordano that he is good playing on the other side of an Offensive Defenseman. Brodie-Letang would be sweet.

And if we are trading Hornquist….which I think could happen, send a flyer over to St Louis to see if they have interest and put a Shattenkirk-Hornquist multi player deal together.

We couldn’t afford brodie. 40 pts last year. 26. contract is like 4.6/year with 4years left so that would be considered a pretty good contract. Stats wise Brodie is better offensively. Also I think Pens are more interested in adding a rental that would cost a 2nd and a mid-level prospect (Sundqvist/rust). Brodie would likely start with an ask of Hornqvist and probably more.

The problem is that it wouldn’t be up to the Pens who they trade for, it would be up to Calgary and I have not seen any indication that they are interested in moving Brodie.

It’s clear I’m the smartest poster on the site. Damn shame I don’t comment as much anymore.

Because you are too busy with Micheal Sam and working at KFC. Gives you no time to come here which makes this site much peacefull

By the way sammycakes, who was it that told you Kessel would fit better with the Super Russian than with the Canadian fraud? Guess gaydogg was right as usual.

Jay, I posted that observation while you were still defending Sid’s place on the power play. Stick with me bud and I’ll save you from yourself.

I won’t argue who said it first because I honestly don’t pay much attention to what you say so I have no clue when you said it but I have been on the Kessel fits better with Malkin trade since the day the trade was announced so it would be pretty hard to have been on board before me and I wasn’t the only one by any means.

a player that couldve suited good with sid is fleishman

haha! yeah right. i though the perfect player for cindy was kessel! hahahahaha!

Right. Thankfully, Kessel has been flourishing since we got him away from that anchor.

Poor Fleischman. Why would he want to play with an average 3rd line winger like Sid?

all of this is irrelevant. gina and cindy aren’t worth 8.7 million and they are both extreme underachievers. the pens are EFFED!

finding crosby a winger! hahaha! they could get him anyone, sid won’t go to the net, and a week later that winger will go to gina malkin! hahahahahaha!

Remember when you tried to pretend it was the league that was holding him (and everyone else) back?

There wasn’t as legitimate shred of useful news or even conjecture in this article.

This is the inside information that requires monthly subscription fees

too many names now the drooling will start

The same way you were drooling over Martin St. Louis. You fat ass.

I have yet to see Eric staal to pens rumors anywhere else. Hornqvist for neal trade looking worse.

i saw ek had this one the other day. a real valid source, if ever there were one