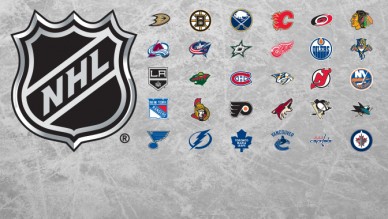 Dustin Byfuglien agreeing to a 5 year, $38 million extension with the Winnipeg Jets Monday has been met with disappointment among Stanley Cup and playoff contenders.

Several teams had Byfuglien as their No. 1 trade target in the event that the Jets might put him on the market.

The Los Angeles Kings and Florida Panthers were two notable teams said to be preparing big runs at Byfuglien and chatter in league circles had the Capitals not ruling out a pursuit of Byfuglien. Just about any contender with a need on the blueline was going to look into Big Buff.

Here’s some scuttlebutt coming from scouts, executives with Byfuglien now locked up and the trade deadline 19 days away:

— Christian Ehrhoff’s level of play has been on a steep decline for the last year and it became clear he wasn’t going to finish the season in Los Angeles. Buzz among scouts is Ehrhoff playing tentative in the defensive zone was a problem from the get-go in Daryl Sutter not being a fan but most baffling to evaluators has been Ehrhoff’s struggles in exiting the zone. The Kings couldn’t find a trade for him but have to think someone takes a chance on him with the low cap hit.

— Lot’s of eyes are on the New York Rangers and what they decide to do with Keith Yandle. New York for the moment is not entertaining trade offers for Yandle but most executives feel a decision from New York will go down to the wire, though, the general feeling is the Rangers keep Yandle and go for it. With a $2.65 million cap hit, Yandle is highly coveted. Los Angeles loves him. How Rangers GM Jeff Gorton views his club will be telling. The Rangers appear to be taking a step back but at the moment still have the 3rd best record in the East.

— Some NHL exec’s feel Lightning GM Steve Yzerman is fully prepared to let the Jonathan Drouin situation drag on to the summer but the sense seems to be a good enough offer will come the Lightning’s way by Feb 29.

— Dan Hamhuis doesn’t want to come East, he can block any trade and some doubt he will accept a trade anywhere, but there is believed to be one possible exception out there he may consider in the East — The Washington Capitals — Lots of speculation league wide of Hamhuis landing in Washington and reuniting with Barry Trotz. Washington seeks depth on their blueline as insurance for the possibility that Brooks Orpik gets injured again upon his return. With Hamhuis just returning from injury, no interested teams nor the Canucks are in any rush here. If Hamhuis moves it won’t be till right around the deadline.

— One front office executive put the percentages at 75% that the Bruins trade Loui Eriksson.

— Vancouver still thinking long-term and wanting to get younger will be very open to moving Radim Vrbata. With the Flames asking price for Jiri Hudler already being established as a second round pick, the Canucks are expected to seek a second round pick or solid prospect. That said there’s some talk both may go for as low as a third round pick. Pittsburgh is considering Hudler as a trade option.

Many teams are taking a close look at Blue Jackets defenseman Fedor Tyutin this month. The 32 year old has two seasons left on his deal with a $4.5 million cap hit.

— The Penguins like many teams are monitoring the situation in Calgary to see if Kris Russell hits the trade block. It’s anticipated he will in the next 10-14 days. High volume of suitors expected.

— A tough deal to make in-season but the Penguins interest in Jets def[hide]enseman Toby Enstrom is still very much there, NHL sources say. Rutherford tried hard for Enstrom prior to acquiring Trevor Daley and has circled back. With Byfuglien now signed, Winnipeg is motivated to move Enstrom for winger help but might be a summer type deal. Enstrom, 31, has two years left on his deal with a $5.75 million cap hit. [/hide]

Not sure what’s worse, a grown man wearing a game jersey with another man’s name in it or fan boys who call professional athletes who they don’t know and never have met by their nic name.

I’ll tell you what’s worse – making up your own nicknames like “midget.”

Lol. Stanch wearing his Fleury jersey to work today. Does Dunkin Donuts let you get away with that?

Tell us some more about how it’s the goalie’s fault when you get shut out – it’s really entertaining.

Still waiting for that columbus deal…….King?

I like Toby Enstrom a lot, but his play isn’t what it used to be, and that cap hit is damn near awful.

Can’t believe they got shutsout

What happened to Daley?

Lower body, left in the 1st and never came back. “Sully” said he hasn’t spoke to anybody yet about how serious it looks.

This training staff is the worst in history. This is every fucking year.

Didnt they fire the last one for sucking baIIs? Or was that just the medical staff? Either way, youre right, they need replaced.

Who replaces Daley…Warsofsky or Cole? Does Pouliot jump to the 2nd pairing now? I’d love to see him together with Dumo.

Warofsky is still hurt no?

Cole will be back in lineup

Was anybody suprised by the outcome of the game? Relax, it’s 1 game.

Its a huge game… one that was basically prewritten by the script we have seen over the past 2 years vs NY. Its a massive concern to see this. My only hope is that now that MS has seen this up close he changes the ending

Kessel is a bag of shit. They need to drop that waste of sperm.

And we know how much you hate to waste another mans sperm.

I usually save it for your tits Nlpples.

Another show down with King Henry and another egg by Fleury. Just getting a sneak peak of the playoffs where Fleury breaks the teams spirit.

No, in a one goal game that could have gone either way he let that 4th line sniper Dominic Moore beat him to the far side with a wrist shot from the top of the circle. Clutch goaltending.

Really? Did you see the Florida game?id rather they have a shot at tying it late and going to overtime. Fleury robbed them of that chance.

No – what I remember about the FLorida game was that they overcame said 2 goal deficit, and here they did not. Giving up 5 goals robs them of that. The only thing that robbed them of that yesterday was none of the other 18 guys that were dressed being able to pot a goal. You lose 100% of the games you don’t score in. For future reference.

Maybe pens should change their name to Habs when they play the Rangers. Since Habs have beaten the rags at home. I think 10 out of last 12 games and I think 7 was a shutouts .rags can’t play good at the bell museum. But divisional teams like the rags and Philly loves to play at Consol. Retirement Center.

Can they change it back to Pens after? I fear theyll never win another cup in our lifetime if they change to habs permanently.

You’re right. The Pens record of 4-2-1 at home against the Rangers the last 3 seasons is just absolutely horrible.

Pens down to the divisional rival they need to catch… Just imagine the impact a Malkin would have had in a game like this.

Where is Waldo? I mean kessel

Just imagine the impact of st blurry would play as good as lundqvist in a big game.

I will preface this by saying yes, MAF has been shit since the break… That’s fine, he stood on his head for us through the first 38 which is why we are even in the hunt. Now that said… Let’s say MAF stops all three? What then? It’s zero, zero so in typical stupid dumb fuck fashion you lay it all at the feet of the goaltender. The Pens would still have to score… That’s been the significant issue vs the Rags for a few years now. For fuck sales your such a filthycunt. “If blurry would outplay the best… Read more »

I agree – cant win if you dont score, and they have had issues with scoring against the rangers

leafs have around 19m in cap space .I wonder if they will pursue Stamkos this summer after seeing last night how Cooper used Stamkos it shows both sides are not happy

If the Leafs unload Franson’s contract, they’ll be in great shape.