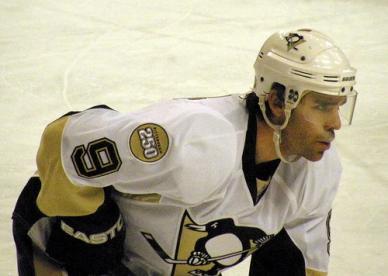 The current roster the Penguins have won’t be anything close to the roster they have next season due to the salary cap going down. In fact, it won’t surprise some around the league if the Penguins have the type of turnover that the Chicago Blackhawks immediately had following their Stanley Cup title in 2010 where they were unable to keep that team in tact due to the salary cap.
Early indications among team sources is that Pascal Dupuis and Jarome Iginla project as the Penguins top two priorities this summer and the team will go from there regarding the rest of their key UFA’s.
Pascal Dupuis contract situation will be among the most fascinating to watch as the 34 year old Dupuis might be the best bargain in the NHL but this is a business of what your value is going forward.
Dupuis tonight vs the Tampa Bay Lightning had his second straight three point game with a goal and  two assists and Dupuis now has 20 goals and 14 assists for 34 points and a plus-27 rating in 41 games this season.
Dupuis continues to show how valuable he is in that he can play anywhere in the lineup, kill penalties and Dupuis producing without Sidney Crosby only enhances his value going into the summer.
When you factor in the leadership Dupuis also brings to the table, any contending GM looking for an all around top-9 player with great speed and character shouldn’t think twice of offering Dupuis a two year deal worth around $4 million per season. That’s how much value Dupuis is expected to have around the league.
For the Penguins, can they get Dupuis to take another significant hometown discount?
Coming off a three contract that paid him $1.4 million per season, during negotiations in June of 2011 on a new deal, the Penguins had the one thing at their disposal in that Dupuis was determined to resign with the Penguins due to his family wanting to stay here.
The Penguins initially were low balling Dupuis offering him a one year deal then finally went two years, offering a 2 year – $3 million contract and Dupuis accepted the deal with an AAV of $1.5 million. It’s still a head scratcher to this day that Dupuis agent Allan Walsh could not have gotten the Penguins to go up to $2 million per season during negotiations that summer.
Will Dupuis be as easy of a sign this time around?
That I highly doubt despite Dupuis wanting to retire a Penguin in the worst way. With Dupuis value at an all-time high, it’s hard to envision Walsh not playing a little bit of hard ball this time around in trying to get the Penguins to double Dupuis salary in what will be the last time in his career to cash in.
What the Penguins figure to have to do to resign Dupuis is go three years, something they are said to be lukewarm about. If they do, the chances of being able to do a cap friendly deal will strongly increase and don’t be surprised if the Penguins eventually come in with a 3 year deal in the range of $2.5 million per season when the two sides open up negotiations. With Dupuis wanting to stay here again, that could get it done.