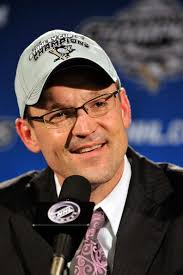 SOME LATEST PENS RUMBLINGS
*The early buzz is that Penguins head coach Dan Bylsma is likely to return behind the bench for next season, though, things can always change in a few days and it’s too early to say that Bylsma is definitely returning.
GM Ray Shero I’m being told still believes strongly in Bylsma and feels he hasn’t lost the room, believing Bylsma pushed a lot of the right buttons in the post-season. Coming off an embarrassing Game 2 loss against the Bruins, the way the Penguins responded in Game 3 proves that point to Shero that Bylsma hasn’t lost the room, a team source said. But, as I wrote Friday, that one consistent bad trend of having those type of games that the Penguins had in Game 2, has to be looked at very hard when evaluating this coaching staff.
Management also needs to consider whether another coach can get the Penguins skilled players to become more defensively responsible, a glaring issue for this club. There’s no hope for Bylsma in that area, but could a Dave Tippett, who an NHL source says would be intrigued about the Penguins head coaching job, implement the right defensive structure and get the Penguins stars to become more responsible defensively? He’s the ideal candidate and someone I hear owner Mario Lemieux could push for.
If there’s one admiration of the Boston Bruins, it’s how their skilled players play “consistent” two-way hockey. There’s no Sidney Crosby or Evgeni Malkin but Boston has their share of very skilled forwards, yet Claude Julien has transformed most if not all of them into players who don’t cheat in the defensive zone. Heck, Julien got Jaromir Jagr to become a player who doesn’t cheat in the defensive zone.
Despite all of those question marks with Bylsma, many in league circles say it will be a big surprise that a coaching move is made in Pittsburgh, but if Bylsma were to lose his job, he’s not going to be out of work long with the New York Rangers prepared to jump into the mix for him were he to be let go.
If the Penguins were to make a coaching change, I feel at the end of the day it’s going to be because of Shero being influenced by those in the organization that now is the time for a change. He’s going to have to have others like Mario Lemieux talk him into it. That, however, is not how things go around here as Shero, who is one of the NHL highest paid GM’s, rarely has ownership intervening on any personnel moves and he has full authority and final say on all personnel moves. The Penguins ownership team let’s the GM be the GM.
That said, the rumblings are out there of Lemieux possibly getting involved this time around after the cash ownership keeps putting up year after year to improve this team.
Last thing on Bylsma and this is something to watch. With one year left on his contract, what’s been relayed to Bylsma in recent months has been that the Penguins intended to extend his contract this summer. If he gets a sense that’s not going to happen, it’s not going to be a good situation for both parties and believe it or not, Bylsma could look for an out than be a lame duck coach where without an extension, expectations from ownership would be reach the Stanley Cup Finals or a coaching change is going to be made.
Another thing to watch is without an extension and management ordering a shakeup of Bylsma’s assistants and Bylsma not getting the final say on the new hire.