League strikes down on Islanders with 100k fine 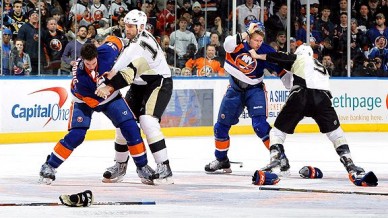 The NHL has struck down on New York Islanders but was it hard enough? Trevor Gillies has been suspended 9 gms for his antics in Friday’s game and Matt Martin has been suspended 4 games for his near sucker punch to Maxime Talbot.
Both suspensions were expected but the big news is the Islanders have been fined $100,000 dollars by the National Hockey League. But, coach Jack Capuano was not suspended and Martin getting only 4 games is very surprising considering the potential magnitude of his antics.
NHL disciplinarian Colin Campbell said in a released statement: “The Islanders also must bear some responsibility for their failure to control their players.”
The Penguins only suspension is Eric Godard who received an automatic 10-game suspension.
The Penguins were not fined.