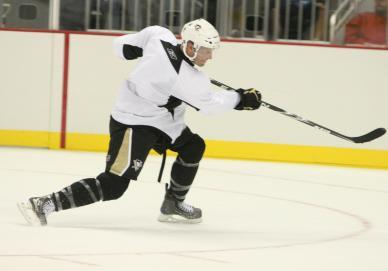 SOUTHPOINTE — After an off-day on Friday, their second in three days, the Penguins are back on the ice this morning going through an on-ice workout.
Forward Mark Letestu is still not practicing, sitting out the second straight practice and he looks doubtful to play tomorrow afternoon against the New York Rangers.
Letestu is nursing an upper body injury he suffered against the Ottawa Senators on Tuesday night.
Letestu not being available doesn’t necessarily mean that Arron Asham will see his first action since Feb. 1.
Asham (concussion) who began practicing with the team on Monday, has deemed himself ready to return to the lineup but he remains on the “extra’s line” with Mike Comrie and Eric Godard in today’s skate.
For now, Chris Conner has jumped back into the top-12, skating on a line with Craig Adams and Mike Rupp.
Dustin Jeffrey figures to skate on the top line against the Rangers with James Neal and Alex Kovalev. Jeffrey is centering the top line for the second straight practice.
A big opportunity for Jeffrey who is coming off a 2 assist game.