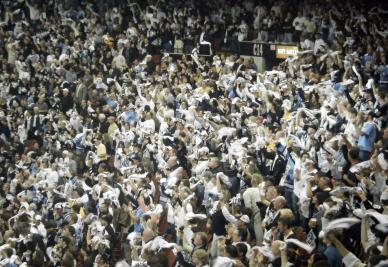 Pittsburgh leads series, 2-0
Evgeni Malkin had a hat trick including two third period goals and added an assist as the Pittsburgh Penguins beat the Carolina Hurricanes 7-4 Thursday night to take a commanding 2-0 series lead in the Eastern Conference Finals.
A display of world class talent and up and down hockey was front and center as the teams combined for five goals in the first period.
Sidney Crosby started things off, scoring his playoff leading 13th goal at 1:51 of the first period to put the Penguins up 1-0.
Crosby tied an NHL playoff record with his sixth game-opening goal of the 2009 playoffs. The record was originally set by Bobby Hull of the Chicago Blackhawks in 1962 and tied by Fernando Pisani of the Edmonton Oilers in 2006.
Carolina responded and gritty forward Chad LaRose (4) scored at 3:07 of the first to tie the game at 1-1 and things were just getting started.
Evgeni Malkin who would steal the show later in the game, jumped on the ice as Jordan Staal was making a change, went straight to the net and banged home a rebound, the Penguins took a 2-1 lead at 8:15 of the first period.
Penguins goaltender Marc Andre Fleury struggled in the early part of the game and was unable to hold onto the Penguins early lead as Jussi Jokinen scored 25 seconds later to tie the game at 2-2.
Hurricanes defenseman Dennis Seidenberg (1) added a goal at 12:40 of the first period to cap off a five goal first period.
Leading 3-2 in the second period, the Hurricanes were unable to neutralize the Penguins offensive attack and the Penguins tied the game again at 3:13 of the second period as Max Talbot beat Cam Ward with a slap shot from the top of the left circles.
Talbot’s second period tally was a momentum changing goal, Pittsburgh outshot the Hurricanes 16-6 in the period and took the lead back on a Chris Kunitz (1) goal with only seven seconds remaining in the second period.
Kunitz won a battle in the corner and found an open lane to net his first of the playoffs and his first goal in 20 games.
“He {Kunitz} executed it perfectly and it was a big goal for us,” Sidney Crosby said
It was a back and forth game during the first two periods and the early stages of the third period followed suit.
Hurricanes winger Patrick Eaves tied the game at 4-4, scoring his first goal of the playoffs at 2:35 of the third period.
Tied at 4-4, the game turned into the Evgeni Malkin show in the third period.
Malkin scored his 9th goal of the playoffs at 8:50 of the third as the Penguins jumped out to a 5-4 lead.
Holding onto a 5-4 lead, Malkin wasn’t done. The NHL scoring champion came around the net and lifted a back hand shot past goaltender Cam Ward to net his 10 goal of the playoffs and his third goal of the game.
Malkin’s third goal of the game was a highlight reel goal and a stamp on the game as Malkin put on a sensational performance in the third period.
Malkin’s next shift he looked primed to score his 4th goal as he came around the net in similar fashion but couldn’t beat Ward.
Malkin’s four point game propelled him to the scoring lead in the playoff as he holds a one point lead over teammate Sidney Crosby (24 pts)
Tyler Kennedy (3) added an empty net goal at 18:11 of the third period to push the Penguins lead to 7-4.
Pittsburgh outshot the Hurricanes 42-28, an increase of 11 shots on goal from game 1.
Tonight’s win was Pittsburgh’s 6th come from behind win in the playoffs.
Game 3 is Saturday night in Carolina