NHL: Malkin unlikely to honor all eight remaining years of his contract? 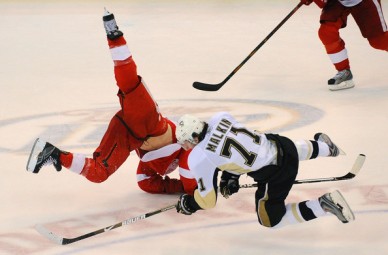 WILL MALKIN PLAY OUT HIS CONTRACT?
Evgeni Malkin this season begins a new eight year contract worth $76 million, paying him a straight $9.5 million per season for all eight years.
Will the Penguins or any NHL team that were to trade for Malkin actually see him honor all eight years?
Likely not.
Every summer Malkin goes home, there is immense pressure to return to the KHL. Malkin came extremely close to staying in the KHL in January 2013 despite the NHL/NHLPA reaching an agreement but was talked out of it by his agent JP Barry.
The Malkin, Ovechkin KHL rumors popped back up this past week.

#KHL prez Alex Medvedev on when we'd see Ovechkin and Malkin in KHL: 'You mean comeback to Russia? There might be good surprises in a year'

NHL sources say Malkin’s U.S. based reps fear Malkin won’t play out his contract and the rumors of Malkin, Ovechkin planning to return to the KHL for the 2017-2018 season and staying there for good are in full steam, NHL types say.
One NHL source said Ovechkin has been facilitating the role of “recruiter” as the two have become much more closer in the last couple years.
Neither is ready to pull a Kovalchuk just yet but the fear of one or both bolting for the KHL in 3-4 years is very real around the NHL.