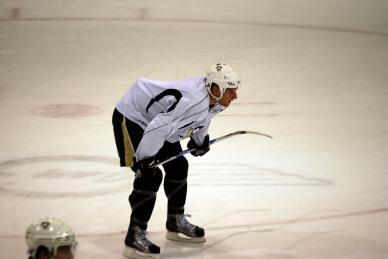 Toronto (13-17-9) @ Pittsburgh (26-11-1)
Morning Skate Update: Defenseman Mark Eaton (right knee) participated fully in today’s morning skate. Eaton, Kris Letang and Martin Skoula alternated as a pairing.
Eaton will return to the lineup sometime this week likely Wednesday night against New Jersey.
Pittsburgh will wear their third jerseys tonight as today marks the 9 year anniversary of Mario Lemieux’s comeback.
* Enforcer Eric Godard has been informed that he will return to the lineup against Toronto. Max Talbot is expected to be a healthy scratch.
******Game 39 Preview********
By James Conley
Toronto Maple Leafs
13-17-9 — 35 pts
5th Northeast — 14th East
4-4-2 Last 10
at
Pittsburgh Penguins
26-11-1 — 53 pts
2nd Atlantic — 4th East
7-2-1 Last 10
With any luck, the Penguins are still mad about giving Martin Brodeur the career shutout mark. That could propel them to twenty or so goals tonight.
I say twenty or so because Toronto has been one of the league’s worst teams all season. The Maple Leafs can’t kill penalties, can’t win faceoffs and can’t score first. They outrank only the lowly Hurricanes in the East. Tonight’s game will be another opportunity to the Pens to rack up points and keep pace with the Capitals and Devils.
Previous Meetings
Pittsburgh beat the Maple Leafs 5-2 on October 10. Sidney Crosby scored two of the Pens’ three PP goals on the night. Vesa Toskala surrendered five goals on 33 shots and Toronto spotted the Penguins 27 penalty minutes.
TORONTO
The key to reigning in Toronto will be shutting down their offense, led by Phil Kessel. The Leafs are 11th in the league in goals scored, and Kessel has 21 points in 27 games played. The team has played considerably better than their 1-7-2 start to the season. Jonas Gustavsson wrestled the starting goalie job from Vesa Toskala and has given the leafs a viable number one goaltender. The team is starting to coalesce under head coach Ron Wilson and is buying into GM Brian Burke’s defensive-minded grand strategy. They have a few nice positives to point to, but the Leafs remain next-to-last in a highly uncompetitive Eastern Conference basement.
Power Play
Pittsburgh went 3-8 on the PP against Ottawa Wednesday. The last time Pittsburgh scored three man-advantage goals in a game was October 10, against Toronto. One rout does not a turnaround make, but another big night for the PP would go a long way to making the unit more confident. Toronto’s key is to stay out of the box. Their 71.9 percent penalty kill is dead last in the league. The Pens PP percentage is still 30 out of 30 teams, but at least is converting at 15 percent after Ottawa. Nonetheless, it can be a weapon against a lowly Toronto PK.
Goaltending
On a night in which the Senators surrendered eight goals and Evgeni Malkin turned a hat trick, Marc-Andre Fleury was the game’s number one star, and rightly so. He put aside 45 of 47 shots, and except for any game against the Devils, has been one of the hottest goaltenders in the league the last three weeks. Gustavsson can make the Penguins work for goals tonight, something Toskala couldn’t do in October. The Maple Leafs can score goals, but will need two handfuls of them to beat Pittsburgh.
Evgeni Malkin
There were whispers about Malkin losing confidence in his shot before last Wednesday’s game, something Malkin himself nodded to in a pregame interview. He scored three goals on the night and played like a man possessed. For real. Malkin’s third goal was scored on a breakaway in which he threw a Hines Ward stiff-arm into an Ottawa defenseman. If Crosby doesn’t beat the Maple Leafs, Malkin probably will.
Strength up the Middle
Sidney Crosby is in the chase for the scoring title. Evgeni Malkin had a breakout game Wednesday. Jordan Staal has been maturing in front of our eyes (remember the 200-ft. rush he single-handedly created Wednesday?). The Leafs will need to shut down the Penguins’ centers to keep the game competitive. They’ve got several capable defensemen in Tomas Kaberle, Francois Beauchemin and Mike Komisarek, and they’ll have their hands full tonight.
Score first
The Penguins haven’t played in five days and the Leafs are playing their second of a back-to-back tonight. Rust shouldn’t be a concern but the first goal will all but determine the game’s outcome. Pittsburgh is 15-2 when scoring first, Toronto 5-16-7 when trailing first. If the Pens score first tonight, it’ll be over.
There’s not a lot to figure out about tonight’s matchup. The Penguins are the better team by no small measure. Score on the power play, shut down Kessel and jump on them early. Pittsburgh has had a killer instinct this year and has put the clamps on lesser teams. They should do the same tonight.
Penguins Lineup
Dupuis-Crosby-Fedotenko
Kunitz-Malkin-Guerin
Cooke-Staal-Kennedy
Rupp-Adams-Talbot
Defensemen
Orpik – Gonchar
Skoula – Letang
McKee – Goligoski
*Marc Andre Fleury will start in goal