McCutchen the most exciting player in the organization since Barry Bonds? 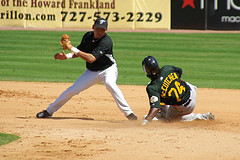 Pittsburgh Pirates center fielder Andrew McCutchen is the most exciting player the Pirates have had since Barry Bonds.
Through his first 17 games of his MLB career, McCutchen has put on a show, hitting .333, leading all rookies in the month of June for hits (26), runs (12) and RBI’s (13).
The most impressive stat McCutchen has put up thus far, is ranking second in the majors with 5 triples.
McCutchen has blazing speed on the basepads, and Pirates fans finally have a reason to turn on Pirates games from time to time to get a look at McCutchen.
McCutchen’s hot start is even more impressive when comparing his performance to MLB’s top prospect Matt Wieters, who has also appeared in 17 games this season.
Inside The Numbers: Wieters vs McCutchen
Andrew McCutchen – Age 22
AVG .333 – 1 HR – 13 RBI’s – 13 runs – 26 hits – 2SB – (3)2B – (5)
Matt Wieters – Age 23
AVG .246 – 1 HR – 4 RBI’s – 6 runs – 15 hits – (4)2B – (1)3B
Maholm gives up 22 hits in last two games
It was only a matter of time but pitcher Paul Maholm has hit a rough stretch.
Maholm has given up 22 hits and 13 ER in his last two starts and his record fell to 4-4 after Sunday’s loss
Maholm has 1 win in his last 11 starts and he is what he is; a true high/end #4 starter but is viewed as a #1 starter on a losing team like the Pirates
Rockies improve to 17-5 under Jim Tracy
The newspapers in Denver are already starting the headlines “Rocktober” as the Rockies have made a Dan Bylsma type of turnaround after making a coaching change.