Mini-Camp Wrapup: Tomlin denies that the starting quarterback job is Leftwich’s to lose 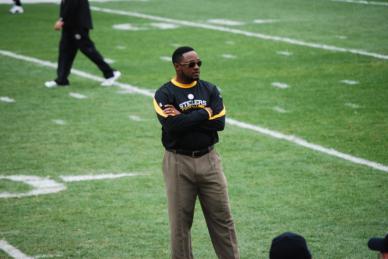 By Dale Grdnic
PITTSBURGH — Pittsburgh Steelers coach Mike Tomlin addressed the media Sunday, as the club’s mandatory mini-camp ended with one final practice.
Tomlin noted that the majority of time was spent teaching, installing the offensive and defensive game plans to the younger players and getting the veterans reacquainted with everything.
Foremost among the veterans was Byron Leftwich, reacquired before the recent NFL Draft to be the starting quarterback for the Steelers while Ben Roethlisberger is under suspension.
“Byron is a sharp guy,” Tomlin said. “He has reacquainted himself to our environment rather quickly, interacting with teammates, understanding the offensive concepts, being able to communicate those things.
“He’s doing a nice job, as are the other guys. We’ve got a long process here for the rest of the offseason. We’re looking forward to watching those guys work and find rhythm with receivers and so forth, and just continuing to grow.”
Even though Leftwich took every rep with the first-team offense, Tomlin was not about to anoint him or any other quarterback — Dennis Dixon or Charlie Batch — as the Steelers’ regular-season starter.
“There will be a time, but it won’t be a time in the near future,” Tomlin said. “There’s no need for it to be. The purpose of the offseason is to instruct. Organized team activity days are just that. They’re for teaching. I’m less concerned about evaluation.
“Some of the evaluation-oriented things, of course, can’t take place in shorts. So it’s on my radar, but not very high on the to-do list at this point. More importantly than anything else, we just want the guys here working, communicating and getting better. Again, it’s on my radar, but it’s not a priority right now. It will be addressed at some point.”
Some believe that while Tomlin has not yet named a starter, it’s Leftwich’s job to lose. Tomlin denied that, saying that Dixon and Batch will still be in the mix.
“They will, but I wanted to give him as many opportunities to reacquaint him to this environment, some of the people that he works with in that group and so forth,” Tomlin said. “The other guys will be given opportunities. No question.”
Roethlisberger won’t be involved in anything with the Steelers, at least until training camp, but that doesn’t mean the team hasn’t been in contact with him.
“I have talked to him,” Tomlin said. “I will continue to talk to him, but I don’t have a crystal ball in regard to when he’s going to be back in the facility. A lot of that has to do with the things he needs to do and, of course, the judgment of the Commissioner.”
It was nice to see all the rookies progress through the weekend as well for Tomlin. Their minds were flooded with information, but a handful — including No. 1 pick Maurkice Pouncey — started to pick things up slowly, but surely with every practice session.
“I wanted to see how (the rookies) respond to failure,” Tomlin said. “When they mess something up, how do they take the instruction? Do they carry it over to the next play? Does it snowball? Are they able to put it behind them? It’s a little window into how they would potentially ride the roller-coaster that comes with being a player in this league.
“That’s all I was really looking for from those guys. I was pretty sure they were going to make mistakes because I’ve been in enough of these camps, and they confirmed that. And I was able to look and see how they responded to the corrections, criticisms and instructions. And, really, that’s all that you’re looking for in terms of the young guys.”
Now, the Steelers players have two weeks off from practice to prepare for the homestretch in OTAs beginning May 18, while the coaching staff works on refining things before going into the summer break.
“We can spend the next two weeks making the necessary adjustments both from a conditioning standpoint and a football standpoint to be prepared for the month of OTAs that follow,” Tomlin said.
“Three-a-week (practices), of course, starting May 18, so we’re excited about that. Guys got a little barometer of where they are, a little direction in terms of where they need to go here in the short term, and that’s exciting.”
Those Steelers coming off injuries, like defensive end Aaron Smith (shoulder), safety Troy Polamalu (knee) and Hines Ward (hamstring) also got a chance to improve their conditioning.
“Aaron is an awesome guy, an awesome professional and teammate,” Tomlin said. “Anytime he’s in a uniform, we’re better for it whether he’s making plays or not. (And) Hines had a hamstring injury, but he’s elderly. He’ll be fine.”
Tomlin also noted that wideout Limas Sweed suffered an Achilles injury Sunday, so his status is not yet known for the remainder of the spring.