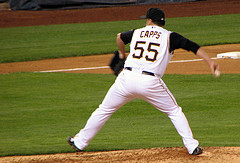 Pirates discussing Matt Capps with the Dodgers, Yankees others
Will the fire sale continue for the Pirates? Maybe
The team is currently involved in talks with the LA Angels, LA Dodgers and the Florida Marlins.
Talks with the Dodgers have been somewhat serious this afternoon.
The Yankees also remain in the mix to some extent.
ESPN’s Jayson Stark reports this evening, Clubs that have spoken with the Dodgers “say they’ve expressed interest in Mark Lowe of Seattle, David Weathers of the Reds, Matt Capps of the Pirates, Reds lefthander Arthur Rhodes and former Dodger Jason Frasor, now with Toronto.”
The Pirates and Dodgers have made two trades since last years deadline.