MLB: Pirates have no plans to groom Alvarez as a first baseman for the foreseeable future 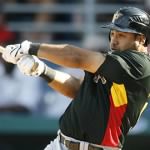 Latest on Alvarez & Garrett Jones
A position change is not in the works or in the Pirates plans for third baseman Pedro Alvarez.
“We don’t want to put too much on his plate and right now to be honest, moving him to first {base} isn’t a thought, ” a team official with knowledge of the Pirates thinking process told Inside Pittsburgh Sports.
Many calling for Alvarez to move over to first base won’t get that wish anytime soon.
The Pirates, as things stand right now, expect to enter spring training with Alvarez as their starting third baseman and Garrett Jones as the team’s starter at first base.
The team had been hopeful to resign veteran Derrek Lee but that “ship has sailed”, a team source said.
Lee’s rep Casey Close isn’t even showing interest in negotiating with the Pirates and never countered any of the Pirates recent proposals.
Earlier in free agency, the Pirates also showed preliminary interest in Casey Kotchman, another client of Casey Close, but Kotchman showed little to no interest in coming to Pittsburgh.
The Pirates looked into the trade market at the Winter Meetings and made an inquiry on Mets first baseman Ike Davis but no movement in trade talks was ever made.
Therefore, barring some movement on the trade front, Garrett Jones who the Pirates will tender, is their man at first base with McGehee as insurance at first and third base.