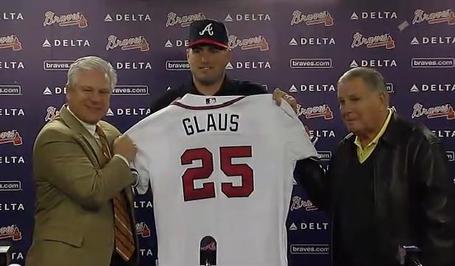 Glaus a consideration
Former World Series M.V.P. and four-time All-Star Troy Glaus is said to be on the Pirates radar as a potential right handed bat first base option, according to team sources.
Glaus is garnering interest from NL teams as a first base, pinch hitting option and according to agent Mike Nicotera, “interest has been good” through the early stages of free agency.
Glaus is evaluating all of his options at this time and is not operating under any kind of timetable, Nicotera tells Inside Pittsburgh Sports.
“Where we are in the process at this point, no clubs have been eliminated from consideration, ” Nicotera told Inside Pittsburgh Sports.com on Tuesday evening when asked if Pittsburgh was a consideration.
Pittsburgh as they are with several targets, are still in the kicking the tires stages and the Pirates are likely to speak with Nicotera at the upcoming Winter Meetings next week.
Adding a “bat” is a priority for GM Neal Huntington. The team has made inquiries on longshot candidates Lance Berkman and Derek Lee.
The Pirates are likely to add a veteran bat on a one year deal.
If healthy, the Pirates believe Glaus can still be an RBI producer and be a great veteran presence with a young team.
Glaus, 34, hit .240 last season with 16 home runs and 71 RBI’s. He made $1.75 million in 2010.
The Colorado Rockies have also expressed interest in Glaus.