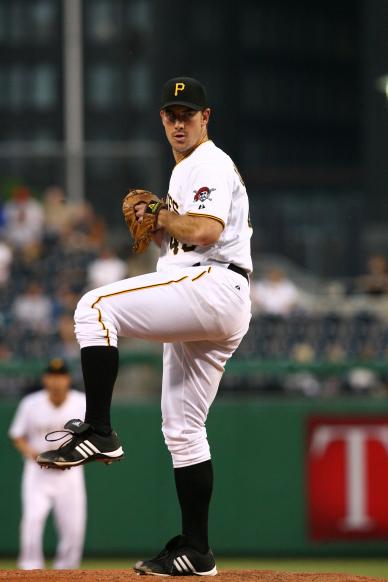 Pirates won’t pursue a veteran starter
Photo: David Hague – Inside Pittsburgh Sports
The Pirates were somewhat active last off-season searching for a veteran starting pitcher. The team reached out to a number of veterans including Pedro Martinez, Odalis Perez, Braden Looper and even Paul Byrd.
This off-season, the organization won’t be looking to sign a veteran starter.
The team is prepared to move forward with their current staff that includes 11 game winner Ross Ohlendorf, Kevin Hart and Charlie Morton.
Paul Maholm (7-7) had had a disappointing season but Neal Huntington & Co are believers in him and blame his struggles on his health.
Maholm has been battling some minor injuries since early June.
Zach Duke is the wild card in the off-season. Duke’s salary will double ($2.2 million) after the season via arbitration.
The Pirates received a number of inquiries on Duke during the trade deadline. If the Pirares receive the right offer, Duke will be a strong candidate to be moved in the off-season as the Pirates would be selling high.
The Pirates may also look to sign Duke to an extension to cover his remaining arbitration years this off-season. Even if they do, it won’t less his chances of getting moved.
Two pitchers waiting in the wings to crack the starting rotation in 2010 are
former first round pick Brad Lincoln and Daniel McCutchen.
McCutchen, 26, is no longer considered a prospect but he’s a player the Pirates are very high on. McCutchen had a strong spring training and nearly earned a roster spot and has posted a 13-6 record in Class AAA Indianapolis.
Lincoln, 24, is 5-2 with a 5.20 era in Class AAA Indianapolis. The Pirates plan to start Lincoln in AAA next season, atleast for the first two months of the season.
Just like Jose Tabata, Pittsburgh doesn’t want to start Lincoln’s major league clock. Lincoln turns 25 next May.