MLB: Russell Martin looking forward to seeing what his value is on open market 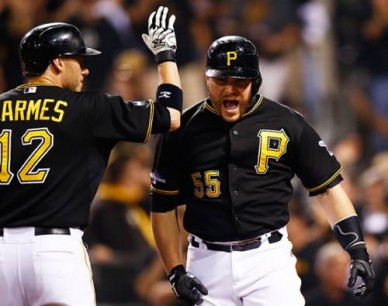 BEST PRICE WILL WIN OUT FOR MARTIN?
Russell Martin will officially hit the open market in two months and the Pirates have known this for a long time, a reason they haven’t made any attempt to resign Martin since spring training ended.
Martin wants four years, Pirates officials have acknowledged privately, which has lowered their expectations of resigning him, though, Pittsburgh intends to make a very competitive offer this winter. However, there’s no expectation in Pirate headquarters that a hometown discount will come from Martin.
Martin, 31, is in his ninth season and is having one of his best seasons, batting .291 with 9 home runs and 58 RBIs. He has a 4.0 WAR and .407 On-Base Percentage, while hitting .368 with runners in scoring position. Martin’s value goes way beyond what he’s done at the plate this season.
Martin made it clear to Jerry Crasnick of ESPN, he’s intrigued about what his value is on the open market.
“It’s going to be the postseason or the offseason coming up shortly, so I feel like it would be unintelligent at this point to not be patient and see what’s out there,” Martin said. “I love the guys on this team, and I love what we have going on here. I love the direction this team is heading in, but who knows?
“If there would have been something done in spring training, it would have been a different story. So far I’m having a solid offensive and defensive year, and people are starting to recognize the defensive attributes of catchers more. It will be fun to see how important that is and how much people value that.”
If Martin is indeed able to land a four year deal, expectations are his value will come in anywhere from $40-$55 million.
Going four years is risky for the Pirates but if they strongly believe Martin has two more All-Star type caliber years left in him, than you bite the bullet and take the risk.