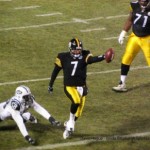 How does that grab you?

A huge portion of the national media and just about everybody in the New England States had declared Brady the best quarterback in the history of football when he advanced to his fifth AFC Championship game last month.

But that AFC Championship game last week didn’t do much to support the theory that he’s the best of all time and it also showed that he’s not as good as Ben Roethelisberger.

I have never seen a quarterback with more room and time to throw on a more consistent basis than Brady, but that sure was not the case in Denver.

Brady has put up some amazing stats and his teams have won a lot of championships but Brady benefits more from the Patriots’s system than the Patriots system benefits from Brady.

Bill Belichick discovered a long time ago that small, quick receivers, who can get open six or seven yards beyond the line of scrimmage, are more valuable than big, fast guys who take more than two and a half seconds to get open.

Spygate proved that knowing what defenses are planning to do before the snap can also come in handy.

If Brady has more than two and a half seconds to pass, he’s going to kill you with eight yard slants.

If Brady is pressured, he stinks.

He’s terrible outside the pocket and he’s no better than every fourth quarterback in NFL history at throwing the ball downfield.

Which brings us back to Ben Roethlisberger.

He’s not perfect but he’s every bit as good as Brady at dinking and dunking and he’s much better at avoiding the rush and keeping plays alive.

The Broncos defense gave up 300 yards passing twice during the regular season and it was Roethlisberger both times.

Brady threw 56 passes in the AFC Championship game and completed 27 of them.

He was intercepted three times if you count the two point conversion attempt that was picked off.

Kordell Stewart is still blamed for the Steelers losses in the 1997 and 2001 AFC Championship games because of his three interceptions in each.

The defenses he played against may have had something to do with those picks just as the Broncos’ had with Brady’s in Denver.

How many passes did Brady attempt against the Broncos that went more than 25 feet beyond the line of scrimmage?

Brady threw a great long pass to his tight end Rob Gronkowski on fourth and 10 that set up the late touchdown, but mostly it was dinks and dunks.

Roethlisberger had issues with interceptions this season, but I don’t think that Tom Brady would be better in the Steelers’ offense and I’m pretty sure Roethlisberger is asked to throw a lot more low percentage passes.

I do think that the Patriots would be just as good with Roethlisberger as their quarterback. Probably better.

Roethlisberger could throw eight-yard slants all day, just like Brady, but he would also be a lot better at avoiding the rush and keeping plays alive.

I don’t think the Steelers would be better with Brady at quarterback.

Brady looked a lot better a week earlier in the Patriots’ win over the Chiefs, than he did in the AFC Championship.

You know how many times the Chiefs touched him?

The Broncos knew that they had to break up that Patriots’ funky passing rhythm. They sacked Brady four times and hit him 20 times.

That’s the most hits taken by any NFL quarterback this season.

It was a great lesson for all of the people who fall in love with quarterbacks’ won-lost record.

Wins and losses are about so much more than the quarterback.

Peyton Manning gets a W in AFC Championship game and Brady gets an L, but Manning’s kicker didn’t miss an extra point.

Tom Brady is a great quarterback.

He may be the greatest dink and dunk quarterback of all time but he wasn’t the best quarterback in the league this season and he won’t be next season.

And he’s not better than Ben Roethlisberger. 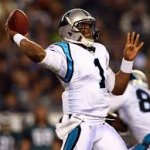 –The consensus among fans and local media seemed to be that the Steelers would have been playing the Patriots in Foxboro Sunday if Antonio Brown had been available against the Broncos on Jan 24.

Maybe. But the Steelers’ defense would not have put as much pressure on Brady and, if they had managed to get to the Super Bowl, the Steelers defense against the Carolina Panthers’ offense and the NFL’s best quarterback, Cam Newton, would not have been a pretty sight.

By the way, I’m not afraid of Cam Newton. This is what he said last week when he was asked why he’s a polarizing figure: “I’m an African-American quarterback. That may scare a lot people. They haven’t seen nothing that they can compare me to.”

Not only is that ridiculously bad grammar, it’s ridiculous.

Has Cam noticed that a black man has been elected President of the United States?

Some people even consider the U.S. Presidency to be even more important than being a starting quarterback in the Super Bowl.

And what’s so polarizing about Cam Newton?

Where did that stupid question come from?

Is a quarterback’s race still relevant?

Cam Newton was the best quarterback in the NFL this season. His team fell one win short of being undefeated.

He put up ridiculous numbers and, not surprisingly, got a lot of attention.

And he had some fun along the way and came up with a harmless celebration dance. Leave the kid alone. Let him play.

The scary thing is that the Super Bowl media horde hasn’t gotten a hold of him yet.

There are lots and lots of stupid questions to follow.

That’s why I do my best to ignore most of what they say and write.

It’s only Monday and I’m ready for the kickoff.

“Throw out wins”. That’s priceless. Thank you for the laugh John. I have no problem with homers when they choose to be so transparent like you.

Where do these people get hired from? Drunk posters could do better

Hey John, did you ever wonder what Brady would do if he ever had a running game? Or receivers to throw to? When he did, he broke NFL records. Most of your writing I like, but you are completely off base here and I’m a Steeler fan. The only people who put Brady ahead of Ben are outright homers. Ben has NEVER been the best QB in the league. He has NEVER led the league in passing yards or touchdowns. Ben also has 22 tds and 19 picks in post season play.Brady is 56 and 28 respectively. I could throw… Read more »

Some more just for fun. Ben has thrown for over 4k yards 4 times to Brady’s 8. He has thrown over 30tds 2 times to Brady’s 6 (including 50 one year). In 54 less games, Ben has thrown 3 less interceptions, but 156 less touchdowns. !56!!!!!! And that’s just in the regular season. Come on man. You are embarrassing yourself in this article. You’re better than that.

How could Brady have advanced to just his fifth AFC Championship game when he’s started six Super Bowls?

You’re on fucking glue buddy. I have never seen a “journalist” work so hard to show horn his personal favourite in to a category above the guy who has been one of the two most dominant players in the position over the past 16 years. Manning and Brady then everyone else. Rodgers is great but hasnt been there to whole time… you have a mix of that throughout. You can argue Ben somewhere close after the top 2 but it takes a special kind of homer to try and make this case

LOL, small quick receivers that get open quickly? I dont understand how one can make an excuse like this on one hand while making sure everyone understands Montana was better on the other hand. Thats the hallmark of the old west coast offence. Quick receivers running slant routes and getting open of quick passes with the odd long ball threat.

Agree with all of that. I like Staggy but man, what a homer.

maloni must be loving this…