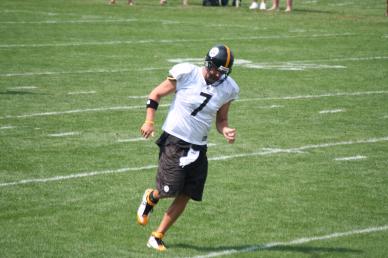 By Mike Bires
On Monday morning, Tyrone Carter intercepted Ben Roethlisberger. But it wasn’t the quarterback’s fault.
The pass to wide receiver Limas Sweed was right on the money. But when the ball slipped through Sweed’s hands, Carter, a safety, was there to snag it.
A couple of plays later, running back Willie Parker dropped a perfectly-thrown pass in the flat.
Coach Mike Tomlin and offensive coordinator Bruce Arians weren’t happy with the drops. But they are at least assured that Roethlisberger is looking very sharp these days at training camp.
“Yes, my arm is where it should (at this stage of camp),” Roethlisberger said.
With two Super Bowl championships highlighting his long list of accomplishments over the past five years, Roethlisberger is still looking for ways to improve.
Arians believes the most important thing Roethlisberger can do this week is continue to build a bond between him and the cast of young and new wide receivers on the team.
“Right now, it’s getting a rapport with receivers at different spots,” Arians said. “If we work Santonio (Holmes) a lot in the slot, now that puts Mike Wallace and Limas Sweed outside. That’s an entirely new set of receivers. That kind of thing can really bother a quarterback.
“So it’s getting used to all the new guys at all the different positions we have to put them in for depth purposes.”
In Thursday’s 20-10 preseason win over the Arizona Cardinals, Roethlisberger played two series and completed 4 of 6 passes for 33 yards. He’ll probably play the entire first half Saturday against the Washington Redskins.
FROG SPOOKS SWEED
Kicker Jeff Reed and punter Dan Sepulveda were quite the pranksters Monday morning. When they found a frog hopping across one of the practice fields at St. Vincent College, they knew exactly what to do with it.
At that point of practice, Limas Sweed had his helmet off. So Reed and Sepulveda placed the frog inside Sweed’s helmet as it lay on the ground.
A few minutes later, when he grabbed his head gear, Sweed was startled when he saw the frog.
“Man, I’m scared of frogs,” Sweed said later.
“It was the kickers,” wide receiver Hines Ward said when asked about the prank. “They don’t have anything to do. They put the frog in his helmet. It was pretty hilarious. All of the guys got a laugh out of it. You need stuff like that. Camp gets tiring and draining and any time you can provide a laugh like that it helps.”
SHANTZ PUTS ON QUITE A PERFORMANCE
Sunday night, linebacker Andy Schantz drew rave reviews for his performance during the annual Steelers’ rookie talent show.
He re-enacted an embarrassing off-season situation in which kicker Jeff Reed was charged for criminal mischief and disorderly conduct for breaking a towel dispenser at a mini-mart.
“Some people asked me to do it,” Schantz said. “I was kind of uncomfortable at first. I really don’t know what kind of guy Jeff is. I didn’t want to offend him in any way. But they told me he was all right with it. I’m glad everyone got a laugh out of it.”
Schantz, a native of Santa Clarita, Calif., had acted in various productions while attending high school and college at Portland State.
“That’s just me. I was a high school actor, a college actor. I played sports. I like doing it all,” he said.
VETERANS’ DAY
Three of the Steelers’ oldest veterans got the morning practice of. Linebacker James Farrior, wide receiver Hines Ward, safety Troy Polamalu and cornerback Deshea Townsend were excused.
Meanwhile, running back Mewelde Moore missed another practice as his tender hamstring mends.
Moore at least did a lot of running. Defensive end Travis Kirschke also sat out after twisting his ankle in Sunday afternoon’s practice.
After missing several practices and the preseason game against Arizona due to an abdominal strain, wide receiver Brandon Williams returned to practice.