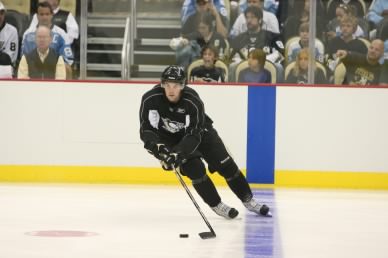 The Pittsburgh Penguins recalled forward Eric Tangradi from Wilkes-Barre/Scranton of the American Hockey League, just after 5:00 p.m. today.
Tangradi who has struggled mightily at the NHL level, has appeared in 12 NHL games this season, going scoreless with 12 penalty minutes and a minus-5 rating. He has mostly played a fourth line role, averagingÂ 9:13 of ice time with the big club and was a major liability defensively in his most recent stint with the team inÂ January.
Â Tangradi, 23, has 15 goals and 31 points in 37 games for the Wilkes Barre/Scranton Penguins.
Nearly every time Tangradi is recalled, some almost always look too much into it and that will surely be the case this time around as the trade deadline is seven days away.
With this callup, look for the daily Tangradi speculation to center around the Penguins wanting to showcase him.
The callup strongly indicates the Penguins expect Tangradi to be in the lineup tomorrow night, as the team does not normally callup a young player a day before a game just to go through the morning skate.
Matt Cooke, James Neal and Evgeni Malkin didn’t skate today and If the Penguins are recalling a player just for insurance purposes, Jason Williams or Colin McDonald who carry lower cap hits, would make more sense if that’s the case.
“We had maintenance days for several players that didn’t go on the ice today, head coach Dan Bylsma said mentioning those particular players have “varying degrees of bumps and bruises”. “We’ll see what our lineup is tomorrow, ” Bylsma added.
The callup of Tangradi was after 5:00 p.m., so Tangradi’s $4,572.00 daily cap hit doesn’t not count against the Penguins cap today.
TIDBITS
— As of this afternoon the team was said to not be close to any potential deals. If there’s a realistic deal out there, management regards a top-6 forward as their biggest need but there’s no ideal trade situation brewing or out there at this point, sources say. Meanwhile, “prices are insane” for depth players, a league source said this evening.
— With the return of Arron Asham this past Saturday, the Penguins feel that the best lineup for their personnel right now is to dress a gritty lineup, which prompted the move to scratch Cal O’Reilly this weekend over the likes of Joe Vitale or Richard Park.
—Internally the Penguins are evaluating their options regarding the backup goaltender position. Those internal discussions have centered around Brad Thiessen possibly getting a look at the NHL level. Detroit’s Ty Conklin who was placed on waivers today, is not considered an upgrade over Johnson. Conklin, 35, is 3-5-0 with a 3.40 GAA and .878 save percentage.
Brent Johnson who has been pulled in three of his last five starts, spoke with the media today: “Itâs been tough, ” Johnson said today on his struggles. “I want to contribute and help my teammates win. Three out of the last six Iâve played havenât been what I wanted {but} Itâs not for the lack of trying. I feel confident every game I go into.”