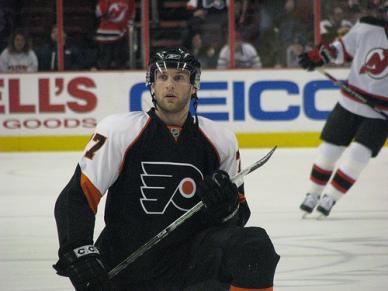 Philadelphia 4 – New Jersey 2
The Philadelphia Flyers (90 pts) took more strides to locking up the #4 spot in the Eastern Conference Monday night, defeating the New Jersey Devils (97 pts) 4-2 in Philadelphia. Jeff Carter scored his 40th goal of the season and Simone Gagne and added his 30th goal of the season to power the Flyers to a critical divisional win. The Flyers winners of three straight got another strong performance from Marty Biron who made 32 saves to record his 25th win of the season. Biron is 4-1 on the season on the second game of back-to-back games.
Carolina 3 – Florida 2 OT
Ray Whitney scored 1:37 into overtime to lead the surging Carolina Hurricanes to a 3-2 victory over the Florida Panthers on Monday night. The win moved the Hurricanes one point ahead of the Pittsburgh Penguins for 5th place in the Eastern Conference. Carolina has won 12 out of their last 17 games and the addition of Eric Cole has made the Canes a team that no one wants to play right now. Eric Cole – Eric Staal – Tuomo Ruutu have combined for 37 points since the trade.
The Panthers were able to gain a point and now tied with the Montreal Canadiens with 81 points.
Inside Analysis
Despite the loss, Florida received some good news tonight with the return of Nathan Horton and Bryan McCabe. McCabe has been missed on the blueline as he takes the pressure off of Jay Bouwmeester. A nightmare scenario will happen for the Panthers if they miss the playoffs after deciding to hold onto Jay Bouwmeester. With Horton and McCabe back in the lineup, I still like the slumping Panthers to reach the playoffs over the Montreal Canadiens.
It may be time to pencil Carolina into the playoffs. The addition of¬†Eric Cole¬†has changed the whole dynamics of that team. Cam Ward is playing
at a higher level than he was during his stanley cup run.
When you look at Philadelphia’s roster they have the deepest group of forwards in the league. One area that is getting overlooked is how the team has gotten younger on the blueline with Ryan Parent and Matt Carle. Gone are Mike Rathje and Derian Hatcher. They are much more mobile now and better suited to matchup against the Penguins down the middle.