Morning After: Under Dixon, Panthers built for Big East Play not the NCAA Tournament 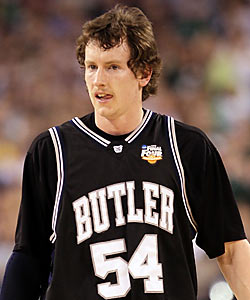 Despite being the No. 1 seed in the Southeast Region, can anyone call Pitt’s ouster in the NCAA Tournament a surprise?
This was a matchup against a Butler team that wasn’t a favorable matchup for the Panthers by any means.
What Butler had on their side that the Panthers didn’t, was the two best players on the floor.
In what’s becoming a common scene under Jamie Dixon, the Panthers are built for Big East play not the NCAA Tournament.
In looking at Pitt’s counterparts in the Big East, there’s a reason that a less talented UConn team is advancing and Pitt isn’t.
In a one-and-done situation, the NCAA tournament is all about great guard play and having that one player who create his own shot and be a dynamic difference maker.
Although I didn’t like this matchup for Pitt at all, losing in the second game of the tournament as a No. 1 seed is a “choke job” and debacle.
Aside from the bizarre final 3 seconds of the game, Pitt has no one but themselves to blame for the loss. Before the Shelvin Mack foul with 0.9 seconds and the Nasir Robinson foul with 0.8 seconds, the game was in their hands to close it out.
As a No. 1 seed, there’s no excuses not to close out.
With Pitt Leading 69-68, Andre Smith missed a layup and Brad Wanamaker got a defensive rebound with 42 seconds remaining in the game. Looking to put the game away, Pitt turns the ball over on a shot clock violation with 9 seconds remaining.
An inexcusable sequence of events for the Panthers as Butler gets time to regroup and calls a great play in having Shawn Vanzant handle the ball, not Shelvin Mack, and Vanzant drives to the hoop and finds Andre Smith inside for an easy layup to give Butler a 70-69 lead with 2.2 seconds remaining.
Everyone in the building thought Mack or Howard would be making the last shot. Butler fooled Pitt to take the lead.
Pitt which prides it self on defense, had Butler where they wanted them and their inability to close out the game is more to blame than Nasir Robinson’s foul with 0.8 seconds remaining.
“I take the blame, man. I take the blame for the loss,” Nasir Robinson said after the game.
What Pitt did during the regular season shouldn’t go unnoticed but moving forward, they have to start developing teams through their guard play, whose style will be better suited for the NCAA Tournament.
The type of players they bring in and the style of play under Jame Dixon is not translating to success in the tournament. It’s no surprise that Dixon’s best year came when he had two NBA players in his lineup in Sam Young and DeJuan Blair.
As much as I like Ashton Gibbs, your best player can’t be a guard who struggles at creating his own shot. That’s why no one should be surprised Pitt got ousted this early in the tournament.