Morning Pens Buzz: Thrilling win in MTL; On Bylsma’s use of Malkin; Art Ross talk; By the Numbers & more 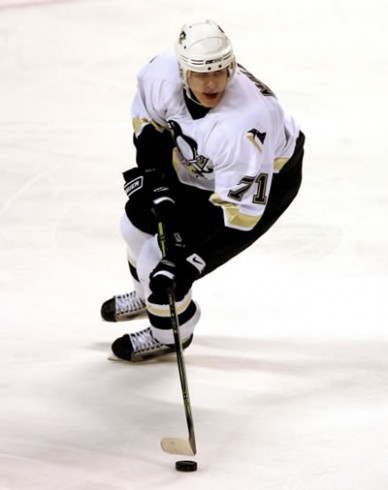 Letang passed a concussion protocol after the Pacioretty hit that didn’t result in a penalty. The Penguins though believe the play will be reviewed by the league. Some feel the hit violated rule 48, which is in place to deter blindside hits.
“It shows a lot of guts and we’re all happy that…. first of all, he’s OK, and for him to respond like that it’s pretty amazing,” Penguins captain Sidney Crosby said after the game. Pacioretty reportedly apologized to Letang after the game.
Overall, it was a strong performance for the Penguins in back-to-back situations. The teamÂ improved to 14-6-3 on the season.
“We played well. Carried the play, no questions about that, “Â Crosby said.
Crosby assisted on Evgeni Malkin’s (8) goal 21 seconds into theÂ game, was given an assist on Jordan Staal’s third period tally. Crosby has 9 points in his first 4 games this season. Crosby logged a season high 20:55 of ice time in the victory.
Crosby’s 20:55 of ice time, was second among forwards, behind Evgeni Malkin who led all forwards with 22:07.
Pascal Dupuis (5), Evgeni Malkin (8), Kris Letang (3), Jordan Staal (12) all scored for Penguins.
Carey Price was excellent and made 38 saves in the loss. Marc Andre Fleury made 24 saves, earning his 13th win of the season, tying him for most wins in the NHL with Jimmy Howard and Kari Lehtonen.
The Penguins now 6-5-2 on the road, boast the NHL’s best record with 32 points at the 24 game mark.
Some Sunday Tidbits:
— Evgeni Malkin does not want to be a full time winger and he’s not right now, but I love the way Dan Bylsma has used him in the lineup since Sidney Crosby’s return.
Malkin on Saturday night vs Montreal, saw a lot of time on right wing with Sidney Crosby that saw the likes of Chris Kunitz and James Neal on the left side at times.
Bylsma didn’t just go to the duo when the Penguins trailed. They saw time together through out the game, even after Jordan Staal tied the game at 3-3. But, what Bylsma has done a good job with is mixing Malkin in at center and wing, especially against the Habs. The way Bylsma used Malkin vs Montreal is something fans should expect to see more often in the foreseeable future.
A few shifts at center, a few at wing and so on….. Using Malkin the way Bylsma did Saturday night makes the Penguins a more dangerous team.
Onto…….

— For all of this talk of Sidney Crosby winning Art Ross Trophy, he’s going to have to hold off Evgeni Malkin.
At the quartermark of the season, Malkin is really starting to hit his stride, especially sinceÂ  Crosby has returned to the lineup.
Malkin who recorded his fourth straight multi-point game Saturday night, has 8 points in his last four games and 22 points in 17 games.
Malkin is averaging 1.29 points per game, which ranks among the best in the NHL for players who have appeared in over 15 games.
Malkin’s 1.29 point per game average is just behind Phil Kessel’s average of 1.30 PPG. Malkin now only trails Kessel by 8 points for the NHL points lead.
Malkin is currently on pace for 97 points, 10 off of Kessel’s 107 point pace.Â

— Nick Foligno took a shot through the media at Sidney Crosby following Friday’s game after Crosby elbowed Foligno in front of the net during a scrum. “It’s not a big deal, but it is something that he preached all summer about that we should limit that and then he goes and does it, so I was just a little disappointed,” Foligno said on Friday. “But, you know, that’s a small part of the game and it’s over now.”
Crosby responded following Saturday’s game. “I don’t what he’s talking about. I was preaching about the hits like [Max Pacioretty’s hit on Kris Letang] tonight, not a scrum,” Crosby said. “I don’t know what he expects after he runs a goalie three times. “He’s probably lucky it was me that was handling it and not someone else. I think if he’s going to do that, he should be ready to expect a response.”
“I think he’s blowing it totally out of proportion. “Two nights before that I go into a scrum and I get punched in the head. I accept that, ” Crosby added.
— Following Wednesday night’s loss to St. Louis, I had some concerns that Jordan Staal was not being aggressive enough offensively since Crosby’s return and was taking a backseat, but Staal has 2 goals in his last two games, and they were once again goal scorers type of goals. Right now he might be the team’s second best finisher, behind Crosby.
Staal’s 12 goals tie him for 6th in the NHL and he’s averaging 0.55 goals per games, first on the team.
Here’s an impressive stat for Staal: His 24.5 shooting percentage ranks 1st among the top 50 goal scorers in the entire NHL.
— If there’s anyone out there who can defend Paul Martin’s play, I’m all ears.
— JoeÂ  Vitale has got back into the lineup the past two nights. Richard Park has been a solid addition for the Penguins butÂ Vitale is theÂ better fit in a 4th line center role.

75: The amount of points Sidney Crosby has in his last 45 regular season games. An average of 1.66 points per game.
17: Combined points Evgeni Malkin (3G-5A) and Sidney Crosby have in their last four games.
4.25 GPG: The number of goals per game the Penguins are averaging since Sidney Crosby’s return
197: Career wins for Marc Andre Fleury
+9: Plus-minus rating for defenseman Matt Niskanen. Niskanen ranks 8th (defensemen) the NHL in plus/minus
16: The amount of points Pascal Dupuis has in the Penguins 14 wins this season. Dupuis has 19 points on the season, tied for 3rd on the team.
26:10:Â Kris Letang’s average ice time per game, 5thÂ in the NHL. Â
18-for-18: The Penguins on their penalty kill in the last four games
7 pts: Eastern Conference points leader Pittsburgh (32 pts) is ahead of 9th place New Jersey (25 pts) by just 7 pts.
3-4-1: The Penguins record when trailing after two periods. The Penguins 3 wins are tied for 1st in the NHL.