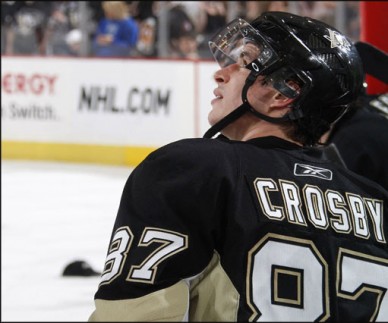 — The Penguins hit the ice in less than 30 minutes for their morning skate and it will be a media circus this morning as the national media has flocked to Pittsburgh with the return of Sidney Crosby. Here are some pre-morning skate thoughts:
BYLSMA MAKING THE RIGHT CALL: — Dan Bylsma’s longterm plan might be to play Chris Kunitz and James Neal with Crosby but he’s making the right call of reuniting Crosby with Kunitz and Pascal Dupuis tonight. Crosby is very familuar with both players and in the past 8 to 10 games, Kunitz, Dupuis both might be playing their best offensive hockey in their careers as Penguins.
Dupuis comes into tonight’s game tied for 4th on the team with 14 points and has 8 points in his last 10 games. Dupuis is having a career year, averaging 0.7 points per game, well above his career average of 0.42 points per game.
Kunitz who got off to a slow start,Â has 7 goals in his last 13 games.
INTRIGUE OF POTENTIAL MALKIN – STAAL – NEAL UNIT: — With Bylsma going into the direction of Kunitz – Crosby – Dupuis, Malkin’s line with Steve Sullivan and James Neal will remain intact. However, the Penguins are expected to move Jordan Staal around quite a bit, as Bylsma indicated yesterday. There’s a lot of intrigue about a potential unit of Malkin – Staal – Neal in certain situations.
DON’T EXPECT MUCH RUST FROM CROSBY — It’s unrealistic to expect Sidney Crosby to return to the level he was playing at last year, averaging 1.61 points per game, but it’s not going to take him long to get settled in. For star players it doesn’t, and how well Crosby looks on the ice, it’s hard to see him struggling out of the gate. A key in his first couple games will be getting his timing back and I also don’t expect him to hold back when it comes to getting knocked around.
CROSBY’S CHANCES OF LEADING TEAM IN SCORING?: —At the 20 game mark, Pittsburgh has two players averaging a point point game or more this season.
James Neal leads the Penguins with 20 points in 20 games, averaging a point per game and on pace for 82 points. Evgeni Malkin has 14 points in 13 games, averaging 1.08 points per game, on pace for 80 points.
Jordan Staal is having a career year with 16 points in 18 games, averaging 0.89 points per game and is on pace for 71 points.
Of the three, Malkin is still the biggest obstacle to Crosby, despite his inability to finish plays which has been a problem for about two years now. Malkin’s 8.6 shooting percentage ranks 278th in the NHL.
Onto Crosby:
If Crosby matches his career average of 1.39 points per game and plays in the remaining 62 games, he will collect 86 points.
More reasonable expectations might be in the lower to mid 1.3 range, which will still put Crosby in the 80 to 84 point range.
Crosby in 2010-2011 averaged 1.61 points per game, well above his previous marks of 1.35 ppg in 2009-2010, 1.34 ppg in 2008-2009, 1.36 ppg in 2007-2008, 1.52 ppg in 2006-2007, and 1.26 ppg in his rookie year (2005-2006).
Power Play Spark?: — One area the Penguins hope Crosby can provide a spark is on the power play tonight. Although his minutes at even strength will be limited at times, Crosby figures to see regular time on the power play. The Penguins come into tonight’s game 1-for-21 in their last four games on the manadvantage.