Morning Pens Buzz: Penguins should go back to Tomas Vokoun in Game 3 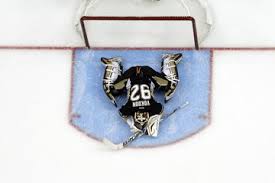 MORNING PENS BUZZ
Heading into Game 3 the goaltending situation is far down the list of worries for the Pittsburgh Penguins and that’s not a good thing. The Penguins have a number of issues and are truly a mess right now being outscored 9-1 in the series. None are bigger than the fact that Pittsburgh’s star players have been absolute duds in the series and a lack of defensive structure and players unable to make basic defensive assignments on the backcheck have been at the forefront of the Penguins issues.
With how bad the likes of Kris Letang and Sidney Crosby have played, maybe the only way is up for the Penguins as the play from Letang, Crosby, and others really can’t get any worse, can it?
Yes, the Penguins have rallied from 2-0 deficits in the past, but this feels like a series that is over and it’s hard to imagine the Penguins being able to take four of five games from a very deep and structurally sound Bruins team that has 18 players on the roster from their 2011 Cup winning team. This is a team that knows how to win and in the playoffs, playing pond hockey doesn’t get it done.
So who does Bylsma turn to in Game 3? The majority opinion out there seems to be Marc Andre Fleury, but I wouldn’t be surprised to see Bylsma go back to Tomas Vokoun and that’s the direction I’d go.
Vokoun lacked the crucial saves in Game 1, unable to stop Brad Marchand on a breakaway 28 seconds in and unable to control a rebound on Nathan Horton’s goal in front, though Paul Martin was in “la la land” as Vokoun seemed to think Martin was going to make what should have been an easy clear.
“I didn’t feel they were bad goals,” Vokoun said. “But that’s part of hockey. I’m sure the coach wanted to change the momentum.”
Fleury, though, appearing in his first game since May 7, doesn’t look to have corrected his issues. Being the momentum killer goaltender he is, he gave up a brutal goal to Brad Marchand with 9 seconds left in the first from 36 ft out as he took a bad angle and his positioning was very poor on Johnny Boychuk’s late goal in the third goal. Rust or not, Fleury’s positioning still does not look sound.
“It felt a little bit rusty not being in there for a while, and jumping right back in is a little different than practice,” Fleury said. “Just the speed of the game. It felt fast at first.”
Bylsma on his goaltenders.
“It’s tough to evaluate given the breakdowns and the type of scoring chances that they scored on for both goalies,” Bylsma said. “Everyone we put on the ice for Game 3 is going to be giving us the best chance to win the hockey game,” Bylsma said