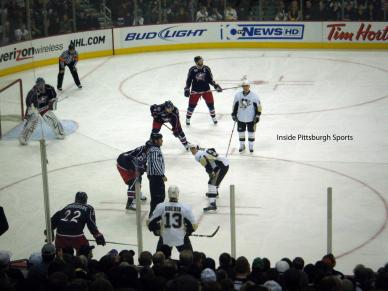 The Penguins went through their first practice of the playoff season this morning at 10:30 a.m. as the team prepares to take on the Philadelphia Flyers Wednesday night in the first round of the playoffs.
The teams primary goal was to claim the 4th seed but going into the weekend with Philadelphia having two games in hand, and Carolina owning a tiebreaker, the players were not very optimistic and were expecting to start the¬†playoffs on the road. All of that changed yesterday when the Rangers rallied to upend the Flyers 4-3.
Practice Notes
All 23 skaters were accounted for this morning.
The Penguins are a very confident team right now but they are not taking anything for granted and the vibe around the room is this year‚Äôs playoff series will be much more competitive than last year‚Äôs conference finals
Miroslav Satan and Craig Adams
were apart of the annual playoff 5th line. As it looked today the Penguins plan on using Eric Godard in game 1.
Godard skated with Dupuis – Talbot today but it is still too early to tell which direction Bylsma is going to go with.
Lines in Practice
Kunitz – Crosby – Guerin
Fedotenko – Malkin – Sykora
Cooke – Staal – Kennedy
Dupuis – Talbot – Godard
Satan – Adams
Penguins look to attack Flyers in neutral zone
The Penguins worked on a variety of breakout drills with a strong emphasis on quick re-groups in the neutral zone.
It appears Bylsma wants to attack the Flyers in the neutral zone and wants to be aggressive with the Flyers forwards.
Defensemen worked on gap control in the neutral zone and Bylsma is looking to make adjustments from the Penguins previous meeting with the Flyers. (PHI 3 – PIT 1)

Boucher or Eaton in Game 1?
The D-Pairings were Gonchar ‚Äì Orpik, Eaton ‚Äì Letang, Gill ‚Äì Scuderi.
Boucher worked in with Scuderi during drills, while Gill skated with Letang on a few breakouts. For the most part Boucher was the 7th defenseman and even Miroslav Satan took some shifts on D.
Still, too early as to which direction Bylsma is going to go with but based on what I’m hearing, Boucher will likely sit for game 1 and Bylsma will go from there.
Power Play units in Practice
Kunitz ‚Äì Crosby ‚Äì Malkin
Letang ‚Äì Gonchar
Guerin ‚Äì Staal ‚Äì Sykora
Eaton ‚Äì Boucher
Analysis: Philippe Boucher worked primarily with the 2nd unit but did take a shift with the first unit near the end of the power play session.
Bylsma has been really impressed with Boucher’s play and said after practice that he has some tough lineup decisions to make; most notably Boucher/Adams
What I didn‚Äôt like with the Penguins 5-on-3 set up¬†– Evgeni Malkin was on the left side at the top of the circles with Sidney Crosby at the top of the right circles. Both players need to switch positions.
The Penguins worked Bill Guerin in on the 5-on-3 situations, working on set plays for a one-timer in the slot.
Guerin could have been on the other side for this series as he has admitted to teammates that he was almost a Flyer after a deal with the Capitals fell through
Special Teams advantage for Philadelphia?
A lot of talk coming out Philadelphia that the Flyers can win this series by winning the special teams game.
For the Penguins, they have shown improvement under Interim coach Dan Bylsma
Under Blysma, the power play is clicking at 19.6 percent (22 for 112) and the penalty kill is at 87.6 percent (99 of 113).
* Chris Kunitz wife is due to have a child in mid-April. Kunitz said he is getting nervous everytime his phone rings.
Penguins in 6?
I’m going to wait a day for a prediction on this series but right now I’m leaning towards Penguins in 6 because of the home-ice advantage.
Will be a much tougher series than last season but the Penguins clearly have the advantage in the net.