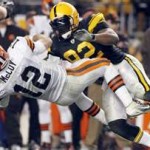 — The Pittsburgh Steelers return to the practice field this afternoon and the team knows there’s a possibility that they will be without QB Ben Roethlisberger, center Maurkice Pouncey and linebacker James Harrison Monday night vs the San Francisco 49ers.
As for Pouncey, expectations from the team are said to not be high regarding him playing, but it’s early, while Roethlisberger’s high ankle sprain is not considered a four to six week injury and will be a wait and see situation all week.
As for James Harrison, the Steelers expect to know his fate for next Monday’s game, by Tuesday afternoon at the latest, a team source says.
The league is mulling a one to two game suspension for Harrison and if that type of action is taken, the Steelers will be informed in the next 36 hours so an appeal can happen before Monday’s game and the team can prepare for the loss of Harrison. Not that Harrison would have a chance of winning an appeal, considering he goes up against the NFL, the ones who dish out the fines and suspension.
The league would love to make a statement and suspend Harrison who was fined $125,000 last season. Harrison’s camp is hopeful that McCoy taking five steps forward and being looked at as a running back in (Harrison’s eyes) will help his cause.
However, the chances of that playing into Harrison’s favor is slim to none. Expectations in league circles are that Harrison will receive a fine greater than the $75,000 he received last season or a one to two game suspension.

1. Houston Texans (10-3)
2. Baltimore Ravens (10-3)
3. New England Patriots (10-3)
4. Denver Broncos (8-5)
5. Pittsburgh Steelers (10-3)
6. New York Jets (8-5)
— The Steelers got no help yesterday when it came to getting back into the top-2 in the conference. Baltimore, as expected, took care of Indianapolis and the Bengals blew a 4th quarter lead, losing the Houston Texans on a last second touchdown.
The Bengals loss was bad news for Steelers in that a Houston loss would be benficial for the Steelers, especially if the Ravens stumble in one of their final three games and Pittsburgh wins out.
When there’s a three way tie at the top like there is now between Houston, Baltimore and New England, head to head tiebreakers are thrown out.
If your a Steeler fan, you also want the Bengals to stay competitive and remain in the playoff race as they host Baltimore in the final game of the season.
While from a win-loss situation, the Steelers got no help yesterday but one positive development is that the San Diego Chargers are hitting their stride just in time for next weeks game against the Baltimore Ravens. The Ravens travel to San Diego in what’s going to be a very tough game for them as San Diego is in a must-win situation and playing extremely well offensively.