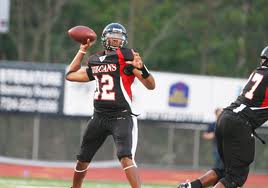 Portis meets with 13 teams
Former California University of Pennsylvania quarterback Josh Portis improved his draft stock with a strong performance at the NFL combine in what was a big day for Portis and the Cal U football program.
Portis was among the top performers in drills on Sunday, and according to sources, fared well during the interview process as character issues have followed Portis from his time with Florida University and Maryland.
There is some intrigue surrounding Portis and at the combine he was right up there with the likes of Cam Newton in drills, breaking the QB vertical jump record (40.0) and tying Newton for first place in the broad jump at 10.6.
Portis, the cousin of NFL star Clinton Portis, met with 13 teams at the combine.
“He met with thirteen teams and performed very well in the testing, ” a high ranking official from the Cal U football program told Inside Pittsburgh Sports.com on Tuesday morning. “He broke the QB record for vertical jump and finished in the top three of every category.”
“Additionally he threw the ball as well as he has ever thrown it. Great day for him and CalU, ” the official said.
Portis was the first player from the Vulcans to attend the NFL Combine. He was one of only 18 quarterbacks invited to attend the annual event.
In only two years at Cal U, Portis established himself among the best quarterbacks in program history. He finished his career ranked fourth in school history with 6,072 passing yards and set the all-time record with 69 touchdown passes.
The 6-4 quarterback passed for 2,650 yards and 33 touchdowns in 2010. He also completed a career-best 61.2 percent (205-for-335) of his passes and led the Pennsylvania State Athletic Conference (PSAC) with a passing efficiency of 156.0.
Portis, a two-time All-PSAC West selection, received All-America Honorable Mention laurels from D2Football.com earlier this month and was a regional finalist for the 2010 Harlon Hill Trophy, which is awarded annually to the NCAA Division II College Football Player of the Year.
PITT COMBINE BUZZ
The combine was not favorable to former Pitt players Dion Lewis and Jonathan Baldwin. Lewis ran a 4.57 forty-yard dash which many believe will push him to a late round draft pick.
Baldwin who in the eyes of some scouts has late first round potential, continues to have character concerns that won’t go away. One veteran NFL scout called Baldwin a “punk” when reached for comment on how Baldwin’s viewed by scouts around the league.
Baldwin I’m told did not do well in interviews and there just appears to be a lot of concerns about whether he has what it takes to be an NFL player.