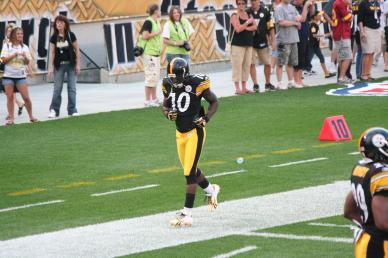 Off-season Look ahead
A top priority for the Pittsburgh Steelers this off-season will be signing star wide receiver Santonio Holmes to a long-term extension.
Holmes is currently in the fourth year of a five-year, $8.11 million contract he signed in July of 2006 as a rookie.
Coming off a sensational 2008 playoff run, the reigning Super Bowl M.V.P. is having a career year in 2009.
After somewhat of a slow start, Holmes has 78 receptions for 1,243 yards and 4 touchdowns through 15 games, all career highs.
The former first round pick draws the oppositions top cornerback tandem on a weekly basis as Holmes is establishing himself as a top 10 wide out in the league.
Is Holmes in line to receive the second largest contract in team history? According to sources, word from Holmes camp is that a starting point in contract talks will be the deal that Green Bay Packers fourth year wideout Greg Jennings signed this past June.
Jennings a second-round draft pick in 2006, received close to $16.5 million guaranteed on a three year deal worth between $27-$30 million.
Both sides will use the Jennings deal as a benchmark to begin talks while Holmes will likely seek upwards of $16 million guaranteed.
In all likelihood, with the momentum Holmes has since last years playoff run, he’s going to cost the Steelers more than $16.5 million guaranteed and will be pushing for more guaranteed money than James Harrison ($20 million) received.