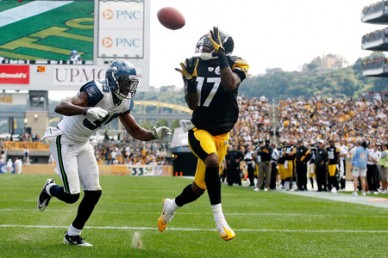 Wallace won’t sign tender
The Pittsburgh Steelers and new offensive coordinator Todd Haley shouldn’t expect to see wide receiver Mike Wallace at OTA’s in the coming weeks.
Adam Schefter of ESPN reports Wallace has no intentions to sign his tender and won’t report to OTA’s. Expectations internally for the Steelers is that they won’t see Wallace until the summer.
A holdout into camp is a strong possibility but Wallace won’t hold out into the season as he would lose a year of service. One year away from hitting the jackpot as an unrestricted free agent, Wallace is seeking top-5 receiver money from the Steelers with sources saying agent Bus Cook is shooting for $28-$30 million guaranteed from Pittsburgh.