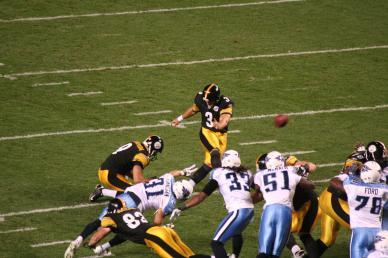 Pittsburgh Steelers kicker Jeff Reed is hopeful to test free agency for the first time in his career.
The 30 year old kicker turned down an offer from the Steelers in September and the Steelers organization remains torn on whether they will place the franchise tag or transition tag on Reed.
Some in the organization are ready to move on.
One team believed to be highly interested in Reed is the Cincinnati Bengals. The Bengals are prepared to cut ties with kicker Shayne Graham. Last off-season the Bengals placed the franchise tag on Graham.
Reed is looking for a salary upwards of $2.75 million.
There could be a strong market for Reed as the Dallas Cowboys, Washington Redskins and Arizona Cardinals could be in the market for a kicker this off-season.