NHL: Could Tyler Kennedy become too expensive for Pens to resign? 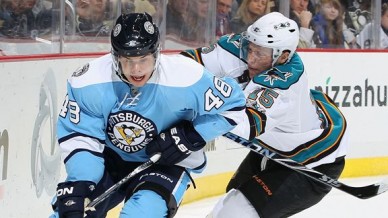 Pens will look to avoid arbitration with Kennedy at all costs
The agent for winger Tyler Kennedy just returned from Europe and expects to speak with…
Pens GM Ray Shero in the next 7-to-10 days to see where Tyler Kennedy’s future with the Penguins stands, sources indicate.
On pace for a career season, Kennedy (15G-17A-32Pts) tied his career high in goals last night, netting his 15th goal of the season in Pittsburgh’s 2-1 OT loss to New Jersey.
Kennedy is on pace for 19 goals and is scheduled to be a restricted free agent at seasons end.
One reason Kennedy’s situation is intriguing is that he’s arbitration eligible. He’s currently making $850,000 with a cap hit of $725,000.
Being a restricted free agent, Kennedy will be in line to receive a qualifying offer of 105% of his prior year’s salary ($850,000).
For a lot of heat he takes from fans, at least it seems that way, he’s very good value as a top-9 forward on a cap-strapped team and again is only 24 years old.
The Penguins intend to lock Kennedy up but with no discussions taking place at this time, it’s unlikely a deal will come to fruition before the playoffs begin.
Where things could get tricky for Pittsburgh is if Kennedy were to opt for arbitration, and if he were to go that route, it could eventually lead to Kennedy becoming too expensive for the Penguins.
Two prime examples last off-season of why Kennedy’s value in an arbitration case could result in a contract well over $1.75 million per season are the arbitration rulings of Tim Kennedy and Clark MacArthur.
Buffalo’s Tim Kennedy was awarded a one-year $1 million contract in arbitration. He was coming off his rookie season in which he made only made $635,000 and finished with 10 goals and 16 assists in 78 games playing mostly on the third line.
The Sabres walked away from the ruling and Kennedy is now on his third team in the past year, after being dealt at the deadline from the New York Rangers to the Florida Panthers.
Atlanta’s Clark MacArthur, a third liner at the time, was awarded a one year $2.4 million contract, coming off a 16 goal – 35 point season.
Kennedy is projected to surpass both of those numbers.
Pittsburgh has $54.9 million committed to 17 players for next season and as a I wrote over a month ago, it could end up being a mistake that Pittsburgh didn’t try to get something done earlier in the season.