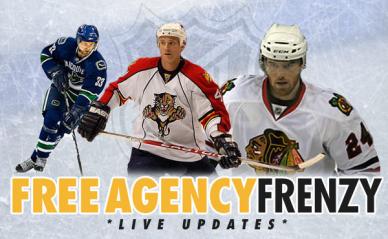 Karlis Skrastins has signed a two year deal with the Dallas Stars. Cap hit of $1.3 million. Pittsburgh was looking at him. Stars have offers on the table to Scuderi and Francois Beauchemen.

The Wild remain the front runners to sign Saku Koivu but the New York Rangers have made a late push making a three year offer. The Ducks, Kings are also interested.

The Atlanta Thrashers have signed Nik Antropov to a 4 year deal worth $16 million.

Mark Recchi will be returning for another season. The veteran winger has re-signed with the Bruins.

TIOPS has the latest

Two teams that have offers to Rob Scuderi are also in on Francois Beauchemen. Those offers could be pulled if Beauchemen signs with one of them. Blues insider Andy Strickland reports Blues are in on Beauchemen. The two teams with offers to both players are believed to be Dallas and the New York Rangers.

Due to amount of traffic, all NHL updates are now on the Penguins Free agency frenzy page

Oilers land their goaltender. Hawks are now stuck with Huet

The Habs, Kings, Rangers and Thrashers are among four known teams that have extended offers to Marian Gaborik. He may wait until tomorrow to sign. Looking into others.

The New York Rangers have signed Donald Brasher to a one year deal.

There’s talk that the Oilers are in talks with the Hawks about Cristobal Huet. Not sure if anything is going to happen. Hawks still trying to sign Khabibulin, although Edmonton could get involved. Roloson has signed with the New York Islanders. Oilers are also interested in Wild goaltender Josh Harding and Scott Clemmensen.

A ton of speculation that Marian Hossa is on the verge signing with the Hawks. There is word his agent Ritch Winter has put off talks with other suitors for now.

The Atlanta Thrashers have acquired Leafs defenseman Pavel Kubina according to reports. Rangers were also in on Kubina. Colby Armstrong could be going the other way.

Francois Beauchemen is in talks with Habs, Leafs and Rangers have expressed some interest. Ducks remain his top choice.

1:17 pm – Islanders in on Mike Komisarek

Mike Komisarek is the hottest name on the market right now. Islanders expressing signficant interest as are the New York Rangers. Leafs, Stars among a number of teams interested in the hard hitting defenseman.

2 year deal worth close to $9 million is believed to be close.

The LA Kings and Atlanta Thrashers have inquired about Nik Antropov. Kings are looking at bigger fish like Marian Gaborik, Martin Havlat.

There’s some talk going around that the Rangers are in talks with the Lightning, Leafs.

Ohlund has signed with the Tampa Bay Lightning.

Canucks in strong pursuit of Marian Hossa and Mike Cammalleri. Rangers turning attention to Gaborik. Hossa and Cammalleri also on their radar.

11:45 am – Scuderi highly interest in Minnesota

Sources close to Rob Scuderi indicate the veteran defenseman is highly interested in Minnesota and will consider them over a rebuilding team like the New York Islanders who will be montioring the Scuderi situation very closely today.

The Canucks have signed the Sedin twins to a pair of 5 year contracts worth $30.5 million. This increases the market for the likes of Hossa, Gaborik and Cammalleri.

Allan Walsh has continued negotiations with the Chicago Blackhawks this morning. There is still an outside shot they strike a deal before noon. Montreal, New York Rangers, LA Kings will be in strong pursuit.

Nashville Predators forward Steve Sullivan will hit the open market and is seeking a two year deal with a NTC. Hurricanes, Penguins, Thrashers, Sabres have interest.

Dany Heatley has nixed a trade to the Edmonton Oilers according to RDS.CA. The Rangers, Blackhawks and Sharks remain interested in Heatley

Rangers are in position to take a run at Havlat, Hossa or Gaborik. One player to watch is Mike Cammalleri who head coach John Tortorella is eyeing.

The Ottawa Senators and Edmonton Oilers have agreed in principle to a deal that will send Dany Heatley to the Edmonton Oilers. Heatley must waive his NTC

Oilers want to move Sheldon Souray instead of Smid or Gagner. The Rangers have been told to find a third team.

Sens want Dustin Penner, Sam Gagner and young a defenseman believed to be Ladislav Smid from the Oilers.

The Calgary Flames have signed defenseman Jay Bouwmeester to a 5 year deal worth $33 million, per TSN

As of late this afternoon, the Hawks, Allan Walsh the agent for Martin Havlat have made progress on the term for a new contract but two sides have still not agreed to a new deal. Will go down to the wire.