NHL: Guerin remains hopeful to sign with Flyers or Bruins 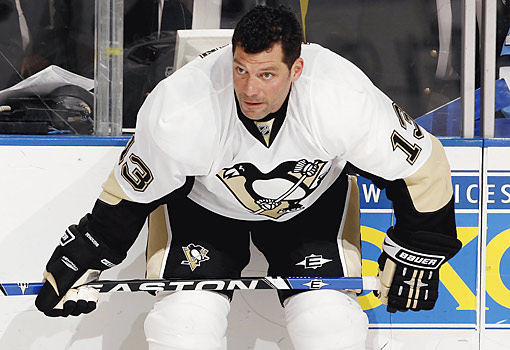 The Philadelphia Flyers and Boston Bruins have been two contenders in the Eastern Conference who were kicking the tires on veteran winger Billy Guerin before the Penguins decided last week not to bring back the 39 year old winger.
Both teams have cap issues which complicates things for Guerin but the interest remains there and as I mentioned on Tuesday morning, via twitter, Guerin is trying to land with Philadelphia or Boston.
Guerin only wants to sign with a Cup contender preferably still in the East. Philadelphia and Boston have been targeted from Guerin’s camp as Guerin’s agent reached out to both teams weeks ago.
Both are teams where Guerin is willing to take a significant reduction in pay from his $2 million a year salary in 2009-2010.
Boston is nearly $3 million over the cap and can’t move on Guerin until later this month. The Bruins though remain hopeful to bring Guerin in.
The Bruins have also not ruled out bringing back former Penguin Miroslav Satan once their cap situation is resolved but Guerin is much higher on their priority list, league sources tell Inside Pittsburgh Sports.
Philadelphia meanwhile has kicking the tires on Guerin since late July.
There has been some thought that Philadelphia decided to pass on Guerin but Flyers management is still mulling the possibility. The team is in the same predicament as Pittsburgh, wanting to look at their younger players first.
The possibility of Guering signing with Philadelphia hit the media circuit on Wednesday when Guerin was skating at the Flyers facility with a handful of Flyers players.
Tim Pacaccio of CSNPhilly.com reports, Guerin worked out with Chris Pronger, Kimmo Timonen, Jody Shelley and others on Wednesday at Skate Zone in Voorhees, N.J.
Pacaccio caught up with Guerin and his agent Bob Murray. A lot of the buzz from the media is that Guerin’s in town looking for a tryout with the Flyers but to my understanding there’s been preliminary contract talks and Murray confirmed that Pacaccio.
Both Guerin and Murray were guarded as expected and tried to downplay that anything is imminent.
“Everyone is reading a lot more into this,” Murray told CSNPhilly.com. “We’ve had some discussions with Philly about Billy as far as a contract. Billy needed a place to skate and this was convenient … It’s a great place to get in shape.”
Guerin praised the Flyers organization today and has clearly made it known he wants to keep playing.
“Philadelphia is a great organization,” said Guerin, wearing a Flyer T-shirt after his workout. “I’m still looking to play. We’ll see what happens …”
Despite still owning a home in the Long Island area, Guerin has no interest in playing again for the New York Islanders, league sources tell me. He’s only focused on joining a contender.
If Boston and Philadelphia each decide to pass, it remains to be seen if Guerin will consider options in the Western Conference.