NHL Notebook: Has the “New NHL” passed Lamoriello by? 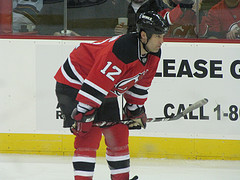 Lou Lamoriello has been with the Devils since 1987, has served longer than any current general manager in the league with a single franchise.
The architect of three Stanley Cup teams (1995, 2000, 2003), Lamoriello is regarded as one of the great General Managers in the history of the game.
Following the lockout, Lamoriello has kept the Devils competitive winning 3 division titles in four years.
Despite winning three division titles since the lockout, the Devils have failed to get out of the second round and have failed to get out of the first round, the past two years.
When it comes to the salary cap era, Lamoriello has become accustomed to over-paying older veterans.
It started in the summer of 2005, when the Devils signed defenseman Vladimir Malakhov to a 3 year deal worth $10.8 million and forward Alexander Mogilny to a 2 year deal worth $7 million.
The deal automatically backfired on the Devils as neither player finished the season on the ice.
Signing the 36 year old Mogilny at the time was even more questionable as he was coming off of two operations on his left hip aftering scoring only eight goals in 37 games in 2003-04, his lowest total since he broke into the N.H.L. in 1989-90.
Not only did the move back fire on the Devils when it came to their on-ice product, Mogilny and Malakhov were eating up $7.1 million in cap space.
Because Mogilny and Malakhov were over 35 when they signed their contracts, the Devils were on the hook for both deals.
Lamoriello found a way out of it just before the team was about to violate the 2006-2007 salary cap by trading Malakhov to San Jose and getting Mogilny and his $3.5 million salary qualified for the exception because of a hip injury.
Following the Mogilny and Malakhov gaffes, Lamoriello made another questionable signing in the summer of 2007, giving under-achieving forward Danius Zubrus a 6 year deal worth $20.4 million.
Zubrus has scored 28 goals in 164 career regular season games with the Devils.
Giving lucrative contracts to players 35 and older has been a normal routine for Lamoriello as he struck again last summer, signing Brian Rolston to a 4 year deal worth $20.248 million.
Rolston struggled staying healthy appearing in 64 games, finishing the season with 32 points, including only 2 points in 7 playoff games. The Devils owe the 36 year old Rolston $15 million over the next three years.
With $12 million in cap space this summer, the Devils have remained very quiet this off-season. Unable to get past the second round since 2003, Lamoriello has hired former head coach Jacques Lamaire to replace Brent Sutter, in the hopes of getting back to being a Stanley Cup threat.
Lemaire guided the Devils to their first Stanley Cup in 1995 and is best known for his trapping “suffocating” style of play. Lemaire coached the Minnesota Wild for the past 8 seasons, making the playoffs 3 times.
From a PR standpoint it’s a good hiring. When it comes to the on-ice product, hiring Lemaire will send the Devils backwards.
The new NHL is about uptempo hockey and a number of teams are moving to that trend.
Just look to Pittsburgh, Edmonton, Minnesota, and the New York Rangers as all four teams have made coaching changes in the past year, with the idea of moving to a more aggressive offensive system.
The Devils were so dominant with their trapping style during the 1990’s and early part of this decade because of their dominating defense and the speed they had upfront.
They no longer have a Scott Stevens or Brian Rafalski on their backend and personnel wise, they are going to be what the Minnesota Wild were under Lemaire; Competitive, keep games close but not a legitimate threat to make some noise in the playoffs.
What the New Jersey Devils have is one of the most dynamic forwards in the game in Zach Parise (45 goals – 49 assists – 94 points).
The plan moving forward should have been to build around Parise who is one of the top 5 players in the game.
Utilizing Parise is playing an offensive style of hockey not a defensive first system.
To this point, the Devils have failed to replace Brian Gionta and John Madden upfront. They also lack a #1 D-pairing to matchup up against the “center rich” Eastern Conference.
With Martin Brodeur being 37 years old and showing signs last year of taking a step back, the Devils as a whole are primed to take a step back next season.