NHL: Pens have yet to decide whether to engage in contract talks with James Neal during the season 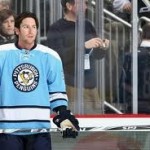 GM Ray Shero has spoken with agent Pat Morris of Newport Sports in the past couple weeks, regarding the contract status of winger James Neal, a league source confirms.
The Penguins though have yet to establish any kind of timetable with Morris on when they might be willing to negotiate a new deal.
Despite several teams like Boston moving quickly this season to lock up their core players, the Penguins are still in the process of deciding whether to engage in talks this season with Neal.
The team intends to hold brief organizational meetings early this month where the team will lay out their plans for their impending unrestricted and restricted free agents.
One reason for the Penguins not being in any rush at this point is that Neal’s an impending restricted free agent, (time is on the Penguins side), and the Penguins I’m told are not overly concerned about hammering out a new deal when they feel the time is right.
When the Penguins traded for Neal, it was a long-term move and the Penguins knew he would eventually cost the team over $4 million per season.
Neal though will be costly at a time when the Penguins are set to dish out new deals this summer to Sidney Crosby and Jordan Staal, as the team can begin talks with both players starting on July 1, 2012.
Neal, 24, is making $3.5 million in 2011-2012 and is emerging as one of the best young goal scorers in the game. He is currently carrying a $2.85 million cap hit.
Bobby Ryan’ (another Newport sports client) 5 year – $26.5 million deal is viewed as a likely starting point from Neal’s camp who are expected to seek over $5 million per season on a new deal.
With Neal already making $3.5 million, the Penguins will have to get creative to keep Neal’s cap hit under $5 million.
The Penguins have $54 million committed to 9 forwards, 6 defensemen and 1 goaltender for the 2012-2013 season.
Richard Park, Arron Asham, Steve Sullivan, Steve MacIntyre, and Brent Johnson are unrestricted free agents at seasons end. Neal, Matt Niskanen, Brian Strait, Robert Bortuzzo, Joe Vitale are scheduled to be restricted free agents.
The salary cap is $64.3 million this season but there is uncertainty for next season due to the CBA expiring in September.