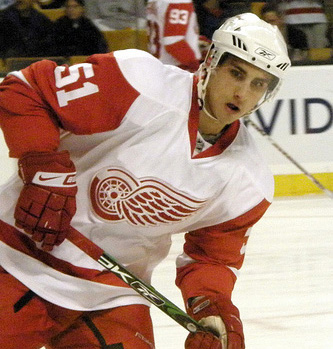 Detroit leads series, 2-0
Playing without M.V.P. candidate Pavel Datsyuk for the second consecutive game, the Detroit Red Wings got timely goals and beat the Pittsburgh Penguins 3-1 Sunday night at Joe Louis Arena to take a commanding 2-0 series lead in the Stanley Cup Finals.
The Red Wings have not only overcame the loss of Datsyuk for the first two games of series but they have also quieted their critics that back to back games to start the series would benefit the Penguins.
The Red Wings have taken a 2-0 lead in the Stanley Cup finals for the second straight year and are in familiar position as the series shifts to Pittsburgh.
Pittsburgh struck first on an Evgeni Malkin power play goal at 16:50 of the first period but Chris Osgood and the Detroit Red Wings kept the Penguins off the scoreboard after that.
For the second consecutive game the Penguins could not capitalize on a number of prime scoring chances as Chris Osgood made 31 saves on 32 shots.
Osgood was terrific for the second straight game and was named the games #1 star. Osgood’s counterpart Marc Andre Fleury had another disappointing game making 23 saves in the loss.
Frustrations boiled over in the third period when Max Talbot put a stick into the chest of Chris Osgood with 18.2 seconds left in the game.
The situation led to Evgeni Malkin going after Henrik Zetterberg and the two star forwards came to blows.
Evgeni Malkin was awarded a 5 minute major for fighting, 10 minute game misconduct and a 2-minute bench penalty for instigating.
Under the NHL rule book, Evgeni Malkin would be suspended for game 3 but following the game the National Hockey League rescinded the suspension.
Valtteri Filppula (2), Jonathan Ericsson (3) and Justin Abdelkader (2) all scored for the Red Wings as secondary scoring has fueled the Red Wings to a 2-0 series lead.
Game 3 is Tuesday Night