October baseball and the Pirates 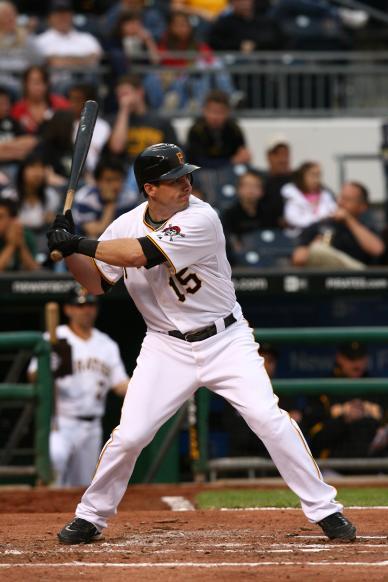 My sports weekend went a little something like this:
Friday night: Banner raising for the Penguin home opener
Saturday: I anchored at Channel 4 and managed to watch the better part of Penn State/Illinois, Miami/Oklahoma, LSU/Georgia, and Penguins/Islanders
Sunday: I watched most of Ravens/Patriots, Cowboys/Broncos, and then covered Steelers/Chargers until the wee small hours of the morning
Monday: The Vikings/Packers “Favre Bowl” on Monday Night Football followed by a Tivo viewing of Monday Night Raw starring Ben Roethlisberger. Which lasted until about 1:00 am
Given the 4:40 am wake up call for my morning show on 105.9 The X, I was in desperate need of a sports-free nap by the time Mike Tomlin’s weekly news conference was over. After running some errands, I sacked out between about 3:30 and 6:30.
It wasn’t until then that I realized…”Hey, isn’t that baseball play-in game going on right now?”
Sure enough it was. So I grabbed the remote and flipped on TBS in time to pick up the action with Detroit leading Minnesota 3-1 midway through the game. The winner of this one game playoff would claim the American League Central crown, the loser would go home.
What ensued was one of the greatest games in baseball history. The moments have been well chronicled by now. Big hits. Clutch double plays. Extra innings. Maniacal crowd. Bad defense followed by sparkling defense. Then more sparkling defense. Hit batters. Hit jerseys. Good calls. Bad calls. Plays at the plate. Tough managerial decisions. Mass celebration for the Twins. Utter dejection for Jim Leyland’s Tigers as they lost 6-5.
It was October baseball at its best. And I loved watching it.
Yet at the same time I felt shame. Here I am, a guy who grew up a DIE HARD baseball fan, and I almost missed it all. I remembered to watch ten football games, two hockey games, and to Tivo WWE for God’s sake. Yet I almost forgot to watch a game like that.
Why? Because, as a Pirate fan, October baseball has been almost entirely erased from my memory banks. The concept is even difficult wrap my brain around. During those dozen glorious innings I found my mind wandering.
I almost played “make believe” in my own imagination. I found myself pretending I was a Twins fan or a Tigers fan just so I could recreate the faint memories and excitement I had of all those beautifully tense Pirate playoff games from the early 90’s.
I wanted to feel the anxt of every pitch and every swing like I did when Barry Bonds was digging against John Smoltz. Heck, I didn’t even mind play-by-play man’s Chip Carey’s “When Sid Slid” reference after Mt. Lebo’s own Don Kelly scored from first base late in the game for Detroit. It was an obvious reference to when Leyland was burned by a big play at home plate in October 17 years ago as manager of the Buccos.
I didn’t care. At least the pain of the memory reminded me my passion for baseball still existed somewhere in my gut.
Yes, the pain of missing playoff baseball for more than a decade and a half has been bad. But for Pittsburgh baseball fans, what dulls the enthusiasm of following the sport on its best stage even more is actually the future.
It’s the abject lack of hope Pittsburghers have for ever seeing their team in such a contest again. At no point while watching Joe Mauer circle the outfield high-fiving all those Twins fans in the Metrodome did I allow myself to believe: “Boy, next year that could be Andrew McCutchen.”
No it won’t. It can’t be. There’s no way it’ll happen. The Pirates have given their fans no hope to believe their team will be anything better than a 95 loss club yet again in 2010.
I interviewed Pirate President Frank Coonelly last week. He gave me the usual quotes. “It was an extraordinarily disappointing year in Pittsburgh in terms of the wins and losses,” said Coonelly, “But there were a lot of good things that happened individually.”
Then Coonelly then went into chapter and verse mode, listing all the many positives that went into a… well… 99 loss season.
Something about Ross Ohlendorf improving. Something about McCutchen and Garrett Jones vying for rookie of the year. Something about Andy LaRoche winning a Gold Glove someday.
You know the song. You’ve heard it before. Just substitute the name Duke or Perez for Ohlendorf. Substitute the name Bay for McCutchen. Substitute the name Jack Wilson for Andy LaRoche.
How did that all work out?
Then Coonelly let loose with the spin about how they’ll get the major league payroll up this off season. How they’ll “look at” free agents this off-season. Maybe a second baseman. Maybe some bullpen help. And how “committed” everybody in the organization, from owner Bob Nutting on down, is committed to winning.
“Like all of the great Pirate fans in Pittsburgh, he (Nutting) is not at all happy with what the club has produced at the Major League level. And my charge is simple. We need to win in Pittsburgh at the Major League level. We need to build a winning organization. We need to have a commitment to excellence again. And he (Nutting) is unhappy when we don’t win.”
Whatever. Call me at the end of July when Zach Duke is about to become a Cub and Paul Maholm is en route to the Mets.
In the meantime, I just watched another thrilling October comeback in the ninth inning by the Dodgers who took a 2-0 NLDS lead on St. Louis. Once again, I pretended in my mind’s eye that game was happening at PNC Park.
Boy, Manny Ramirez looks great in black and gold.