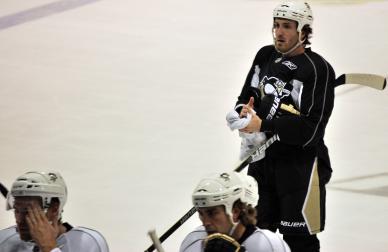 The Pittsburgh Penguins (30-19-1) returned to the ice this morning as the team prepares for a two game homestand that begins Tuesday night.
First up for Pittsburgh will be the surging New York Islanders (22-19-8) who won for the fourth straight time this afternoon beating the New Jersey Devils 4-0, behind a 20 save shutout performance from goaltender Rick DiPietro.
Former Pittsburgh Penguins draft pick Matt Moulson added goals 18, 19 for the Islanders in their 4-0 win. With Dipietro playing today, he will not play tomorrow night against Pittsburgh and neither will Marc Andre Fleury (fractured finger).
A rundown on latest Penguins injury news
* As reported earlier, Fleury was limited today, wearing a skaters glove for protection instead of his regular mit. Fleury will not be available to play for at least the next two games.
Goaltender Brent Johnson (groin) went through his first full practice in a week. Johnson has been cleared to play but was not very sharp in practice today.
John Curry is the safest bet to start tomorrow night as I was given hints today that Bylsma wants to give him an opportunity to rebound from Saturday’s 6-2 rout.
However, a lot of that will depend on how Brent Johnson looks tomorrow morning in the Penguins pre-game skate.
*Defenseman Brooks Orpik (knee) was highly optimistic today that he will return to the lineup tomorrow night. Orpik has missed the past four games and if the Penguins were not optimistic that he would return, they would have kept Ben Lovejoy on the team for at least another game.
Orpik talked today following the Penguins skate about how bad ice surfaces are around the league and he seemed to think that’s the reason for his injury which happened behind the play against the Toronto Maple Leafs.
Did Caputi get a fair shot?
When the Penguins called up Luca Caputi nearly two weeks ago, management had an open mind. They wanted to see how things played out but after an organizational meeting in Calgary, management quickly decided that it was in the best interest of Caputi to be re-assigned to Wilkes Barre/Scranton following the Penguins five game road trip.
While it’s hard to argue managements’ decision, some are questioning the decision to make Caputi a healthy scratch for three straight games, especially considering the fact that Eric Godard had an average of five shifts in the three games that Caputi was scratched.
Updated Eastern Conference Standings (1-8)
1. Washington Capitals (66 pts – 48 games played)
2. New Jersey Devils (65 pts – 47 games played)
3. Buffalo Sabres (64 pts – 46 games played)
4. Pittsburgh Penguins (61 pts – 50 games played)
5. Boston Bruins (54 pts – 48 games played)
6. Ottawa Senators (54 pts – 50 games played)
7. New York Rangers (53 pts – 49 games played
8. New York Islanders (52 pts – 49 games played.