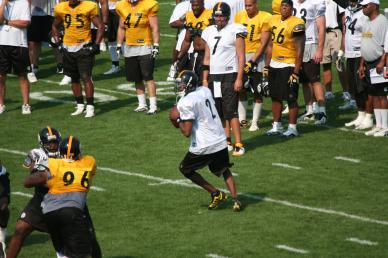 By Mike Bires
Photo: David Hague – Inside Pittsburgh Sports
One of the highlights of practice was when the Steelers worked on their “hurry-up” offense and defense.
The ball was placed near midfield and 1:12 was put on the clock. The offense had to score a touchdown, the defense tried to prevent it.
The first-team offense
bowed out early as Roethlisberger was intercepted by strong safety Troy Polamalu.
The second-team offense, with Charlie Batch at quarterback, threatened but was stopped on downs after reaching the red zone.
It was the third-team offense, with Dennis Dixon at QB, which scored the only TD. It came on a 1-yard run by running back Justin Vincent.