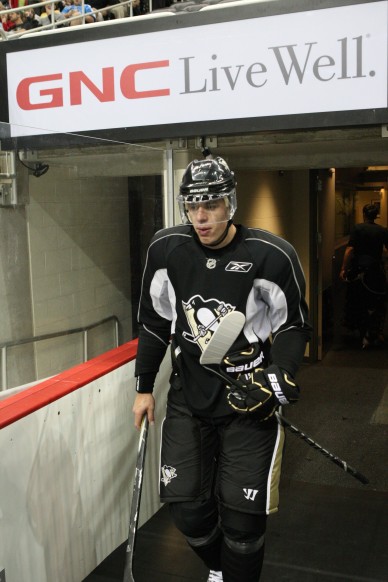 Evgeni Malkin (15G-21A-36PTS) is making his push for the NHL points lead and is playing the best hockey of his career since the 2008-2009 season. Malkin’s 5 point game Saturday night, that included his first hat trick of the season, moves him three points of tying Claude Giroux (16G-23A-39PTS) and Phil Kessel (19G-20A-39PTS) for the NHL points lead.
Of the top 30 goal scorers in the NHL, Malkin has played the least amount of games with 26 and is second in the NHL in points per game, averaging 1.38 points per game.
Malkin is living up to his reputation of stepping up his game when Sidney Crosby is out of the lineup. Since Crosby has been out of the lineup (Dec 8.), Malkin has a five game points streak, collecting 5 goals and 7 assists for 12 points during that span. Malkinâs game though started to take off when Crosby initially returned on November 21. In his last 13 games dating back to Nov 21., Malkin has 10 goals, 12 assists and has posted 8 multi-point games during that span.
Malkin in his art-ross trophy season, averaged 1.38 points per game and heâs back at that level. If he continues at this pace, Malkin not only might take home his second Art Ross Trophy, but he will get himself in the Hart Trophy consideration.

The Penguins could announce tomorrow morning that Sidney Crosby is out for the season due to concussion symptoms and it wonât impact their vision of committing to Sidney Crosby long-term.
The Penguins fully believe that Crosby will have a long career and heâs a once in a decade player so they wonât be the team that doesnât make every attempt to keep Crosby a Penguin for life.
Despite dealing with concussion like symptoms off and on for almost 12 months now, Crosby will still enter negotiations on July 1, 2012 dictating his term and salary. What he wants is what he will get. Crosby in July 2008 took close to $1.2 million less per season (cap hit) than he could have received, agreeing to a cap hit of $8.7 million.
He’s a player who looks out for his team but the difference now is that the max salary is $12.86 million per season and if the salary cap rises next season like it has every year since being $39 million in 2005-2006, that number could be over $13 million.
GM Ray Shero has said to not be a fan of deals over seven years, but with Crosby, Iâm told Pittsburgh will consider an 8 to 12 year deal and explore a life contract if Crosby is interested, despite NHL officials actively looking to end those type of deals in the new CBA.
The CBA expires in September 2012 and some top league officials are looking to implement a system where deals canât be longer than five to seven years. Some GMâs in fact are also pushing for a players salary in each season of the contract to equal the overall cap hit. Therefore, a player who signs a five year, $30 million contract, the players annual salary would be $6 million in all five years.
If a new CBA is in place by July and potential new rules such as a 5 year max on length of contract and annual salary/cap hit was in the new CBA and implied to players signing extensions, it would impact the Penguins tremendously as they wouldnât be able to get creative with Crosby or even Jordan Staal and James Neal who will be top priorities for the team.
The Penguins have around $54 million committed to salaries for next season.
Meanwhile, Pens GM Ray Shero spoke to the Tribune-Review about Crosbyâs long-term future with the team. “I’m under the assumption that he’s going to play in the NHL for another 10 or 15 years,” Shero said of Crosby. “We all know he’s the best player in the league when he’s healthy. My mindset on Sidney Crosby is not changing. We want to sign him.”

— Speaking of Crosby, the sense inside the organization is that Crosby is more likely to return to the lineup before Kris Letang whoâs limited to light to moderate exercises at this point.
— 2011 second round pick Scott Harrington making Team Canada over first round pick Joe Morrow didnât surprise many scouts. Harrington isnât a âgiftedâ defenseman from a skill standpoint like Morrow, but in the defensive zone Harrington is leaps and bounds ahead of Morrow and thatâs no knock on Morrow. He’s that good defensively.
— The Penguins envisioned Simon Despres being up for just a couple games when he was recalled for the Capitals game on Dec 1, and the recall has ended up becoming an extended stay and a great experience for Despres and an evaluation tool for the Penguins moving forward. The Penguins have been thrilled with Despres progression and heâs widely viewed as a likely full time regular in the top-6 by 2012-2013 season.
— The Penguins were off today and re-assigned defensemen Carl Sneep and Brian Strait to Wilkes Barre/Scranton. Strait is fully healed from an hyper-extended elbow that was a two-plus month recovery for him.