OTA Notebook: For the Steelers, spring semester is over 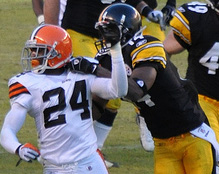 By Mike Bires
For the Steelers, spring semester is over.
They went through their last of 14 scheduled organized team activity workouts on Thursday, and coach Mike Tomlin was ecstatic about what he’s seen in recent weeks.
“We just put the finishing touches on what has been a very productive OTA session for us,” he said. “I thought we had a successful off-season from a teaching standpoint. We provided guys with plenty of opportunities to get reps and learn. Guys who needed rehabilitation got that.
“As we sit here today, all-in-all, it was a pretty productive off-season for us.”
Even though the majority of the regulars from last year’s Super Bowl team attended all or most OTAs, it’s the newcomers and a handful of younger players who got the most out of these practices.
It was a time to watch draft picks like first-rounder Ziggy Hood, who’s making the transition from a 4-3 defensive tackle in college to a 3-4 defensive end in Pittsburgh.
“The one thing that stood out about him is he’s willing to and capable of running to the football,” Tomlin said of Hood. “He covers a lot of ground for a big man.”
In the OTAs, inside linebacker Lawrence Timmons and cornerback William Gay eased into their starting roles (Timmons replaces Larry Foote, who was cut; Gay replaces Bryant McFadden, who left via free agency).
The OTAS provided Rashard Mendenhall, last year’s first-round draft pick, a chance to work his way back into the running back rotation.
“Watching those guys move around the building and be comfortable in their shoes, I like where they are,” Tomlin said. “They understand how we do business here. I think they are developing an understanding of how they fit in the big picture. Ultimately, the quality of their play will determine what their roles are.
“No question we held those guys in high regard when we drafted them. That is why we drafted them where we drafted them. They are going through a process to become the players they aspire to be.”
The OTAs also provided a mini-preview of some intriguing training camp battles that will commence on that first day of practice on Saturday, Aug. 1.
Perhaps the most intriguing of those competitions will be at wide receiver, where the Steelers need to replace No. 3 wideout Nate Washington, another free agent defection.
When asked if Limas Sweed, a second-round pick last year, has the inside track, Tomlin said
“no” without hesitation.
When asked who else is in that mix, Tomlin said, “All of the guys other than Hines Ward and Santonio Holmes.”
Other than right guard, where Darnell Stapleton will try to hold onto the starting job he fell into last year when since-released Kendall Simmons tore an Achilles tendon, there are hardly any starting jobs up for grabs.
But Tomlin is always looking at depth and position flexibility, so there will be several intense battles for backup spots, especially at running back, cornerback, offensive line, kickoff and punt returners and maybe even quarterback where veteran Charlie Batch looks to fight off second-year pro Dennis Dixon.
“One thing I am certain of, nothing stays the same in this business,” Tomlin said. “Someone is going to surprise us and be on the rise, and someone is going to surprise us and be on the decline. I make a conscious effort to remain open to those possibilities.
“I am looking forward to watching our team report to training camp individually and collectively. I am going to let the dust settle wherever it settles.”
That process begins seven weeks from today.