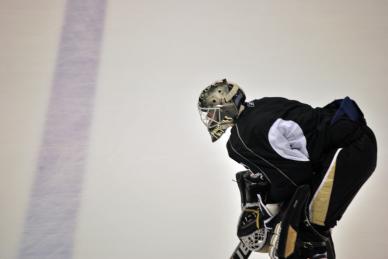 Florida (2-5-0) @ Pittsburgh (8-1-0)
The Florida Panthers are off to a slow start for two reasons; They struggle to score goals (16) and they have given up 27 goals in 7 games. Michael Frolik leads the Panthers with 5 points while top forwards Nathan Horton (2pts, -6 +/- rating) and David Booth (2pts, -5 +/- rating) are off to slow starts.
Panthers number 1 goaltender Tomas Vokoun is 1-5 with a 3.68 goals against average on the year. The Panthers are coming off a disappointing 5-2 loss at home to the Buffalo Sabres Wednesday night.
Morning Skate Update
*As expected Jay McKee (family reasons) accompanied the team this morning and participated in the Penguins morning skate. McKee is expected to be paired with defenseman Martin Skoula who will make his season debut tonight but the Penguins used a number of different pairings this morning.
Skoula and goaltender Brent Johnson will be two lineup changes Dan Bylsma will make but is he sticking to his winning lineup at forward?
There were no changes on the Penguins top four lines in practice yesterday or at today’s morning skate. Chris Bourque was the extra forward during line rushes the team went through. We will wait word from Dan Bylsma to see if Bourque will be a game time decision.
*As usual the Penguins did some work on the power play for about 10 minutes. Based on what I’ve seen at practice, look for Goligoski and Letang to alternate at the points in certain situations to give the Panthers a few different looks.
*Penguins General Manager Ray Shero was speaking with Panthers GM Randy Sexton for a long period this morning. Both GM’s know each other very well dating back to Shero’s time with the Ottawa Senators in the 1990’s.