Penguins, Brandon Sutter getting closer on a new deal 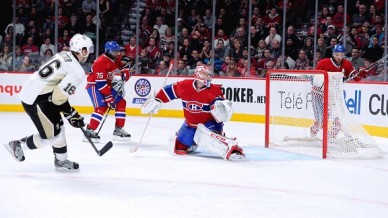 After some back and forth on short and long-term proposals over the last couple weeks, the Penguins believe they are closing in on a new deal for restricted free agent Brandon Sutter that “should” be completed by the end of this week, a team source says.
Craig Oyster the agent for Sutter, also expressed optimism of the two sides finalizing a new deal, within the next week or so, when reached for comment moments ago.
“We have had good discussions this week and are hopeful of reaching an agreement soon,” Oyster said.
I have received no denials that the new deal will be for only one year but no one will confirm at this point. Sutter’s agents have recommended he accept a one year deal so he can test free agency next summer.
The Penguins, though, have tried to sell Sutter “hard” as one source put it, on a long-term deal, and had offered a deal of at least 4 years more than a week ago.
Sutter had 13 goals and 26 points in 81 games last season for the Penguins. In his career Sutter has 77 goals and 152 points in 415 games.
Offensively he’s been a disappointment during his two year tenure with the Penguins, scoring just 24 goals in 129 games.
At even strength Sutter scored 0.375 goals/60 at 5 on 5, just a few clips above Craig Adams.
Advance metrics show Sutter grading out as an elite defensive centerman but scouts have a different opinion as Flat Stanley lacks the strength to be a true shutdown center.
What was promising for Sutter is he graded out as one of the Penguins best performing forwards in the playoffs by coaches, team officials, and Penguins officials feel Sutter’s lack of wingers have played a part in his lack of production the last two seasons.
He possesses an excellent shot, especially when coming down the right side with speed.
GM Jim Rutherford feels Sutter’s offense can increase this season by being used differently.